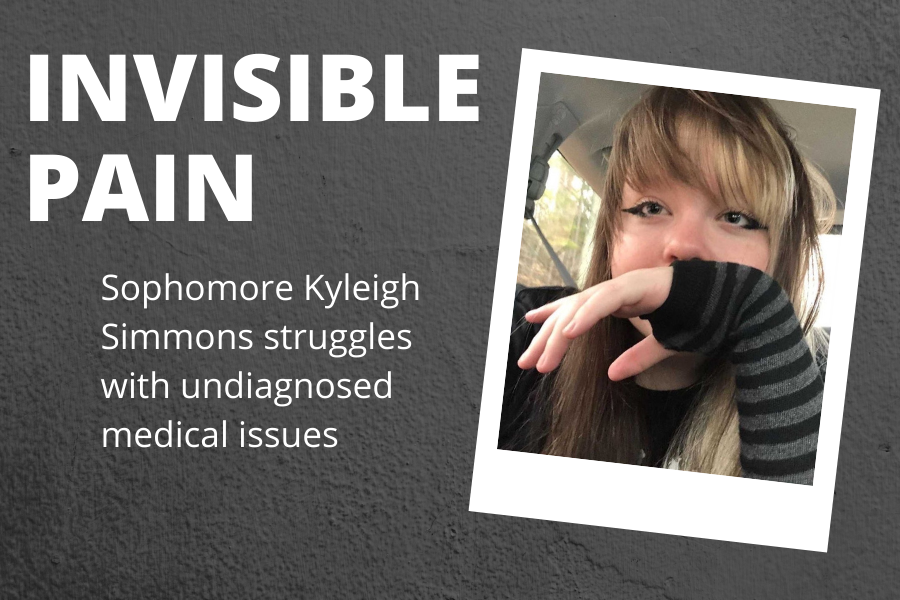 At the age of 7, sophomore Kyleigh Simmons would find hard objects from her room to place under her upper back to just get a peaceful night’s sleep.

Noticing her extreme back discomfort, her parents took her to a doctor to try and figure out why she could not lay flat or stand up straight without having sharp pain. Doctor after doctor, no one knew for sure what was wrong. Eventually, a doctor decided to diagnose Simmons with anxiety for her back pain.

Simmons’ pain has not only been in her back, however. She has developed additional problems, including some unrelated to physical pain. One issue Simmons is currently fighting is the urge to not fall asleep throughout her daily life. Added onto her sleep problems, Simmons has trouble fighting her anemia with physical activity.

“I need a lot of sleep, and I sleep more than average every night, but I still fall asleep during the day and have extreme disorientation upon waking,” she said. “This limits most of my life, as doing school or activities is replaced by falling asleep. Retaining information is hard as I fall asleep sitting up in class, and I am very brain fogged. Simple things like walking are enough to exhaust me, but this could [also] be a symptom of my anemia,” Simmons said.

Aside from her struggle to stay awake, another challenge Simmons has is with her current arm pain.

“[Something else that is currently causing me pain is] arm problems, which seem to come in flare ups,” she said. “I experience shooting pains, numbness, arm weakness, and my upper arms are super sensitive, and poking them is enough to cause me pain.”

With the different pain symptoms, she has gone through numerous tests and evaluations to try and label her issues throughout her life.

“[Recently] I did receive an upper endoscopy for stomach pain this summer,” she said. “Last week, I had an MRI and am waiting for the results. It lasted an hour, which is uncommon, but I believe it’s because they took pictures of multiple body parts.”

However, not all doctors Simmons has seen has given her testing. Some doctors chose to go straight into treatment without having any diagnosis.

“Many doctors have actually pushed off my symptoms,” Simmons said. “As an example, I had extreme rib pain, and the doctor gave me medicine without any testing.”

Simmons has also been falsely diagnosed multiple times by past doctors. But she states that she has found doctors now that she believes are good and hopes to avoid misdiagnosis again.

As Simmons continues to not know why her body is constantly distressed, it takes a toll on her mental health as well.

“Before [dealing with all my health problems], I was diagnosed with depression and anxiety, so having this pain makes me more anxious to tell others [about it], especially if they don’t believe me,” Simmons said.

Simmons has to balance her health issues with her personal life and school work. Because she misses school often for testing or because of health issues, Simmons has struggled with completing her assignments on time.

“Last year, I missed a lot of days by being at the doctor, and I tend to turn in assignments late, because finishing so much just seems impossible for me,” Simmons said.

Considering her future, Simmons hopes her medical problems won’t inhibit her from pursuing her dream job as a tattoo artist. She hopes that she can start finding treatment or ways to deal with her issues so that when the time comes, she will be prepared to work with them.

“Considering my hopes for tattooing, the idea of [my] arm pain and numbness getting worse makes me worry about if [becoming a tattoo artist] will be able to happen for me,” Simmons said. “I worry that places won’t hire me for the sleep problems. I really hope to get a diagnosis to plan for the future.”

Simmons wants to live her life and be treated like every other teenage girl. She wishes that others would understand that she is not incapable of reaching her goals and see her as more than just “the girl with problems.”

“I just wish people [would] understand that just because I do less than you doesn’t mean I’m not doing my best,” Simmons said. “I do not want to be outcast as if I’m not still a regular person.”