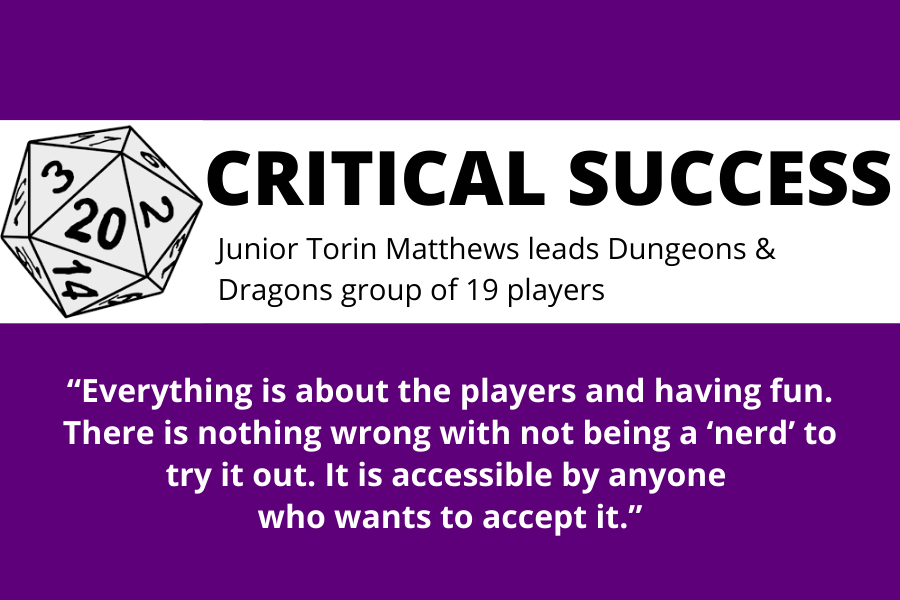 Mythical creatures, make-believe, adventure and logic all come together in the award-winning game Dungeons & Dragons.

The open-ended, tabletop role-playing game gives players the ability to create characters, go on various adventures and face challenges. It has been popular among people of all ages since its creation in the 1970s. Junior Torin Matthews began his own Dungeons & Dragons group with other Bryant students in September of 2019, and since then, the group has grown to about 19 members.

“I found interest in the game a few years ago,” Matthews said. “I saw it on YouTube and I thought the creativity and teamwork aspect was the most appealing feature.”

Matthews established the group since he wanted to utilize the teamwork aspect and play the game with others. However, because of COVID-19, the group has had to find other, non-traditional ways to play together.

“We want to play in-person, but we haven’t had much luck finding somewhere to go,” Matthews said.

For now, the group is playing on a Discord server that they created, which is managed by Matthews. Discord is an app that allows players to communicate through text messaging, voice calls, video calls and more to stay in touch while playing games, or just to stay in touch in general. The app’s many forms of communication have allowed the group to maintain their bond virtually.

“I enjoy, above all, the memories and inside jokes created by the players’ responses to certain phenomena, as well as the friendships and times to unleash our inner-nerds,” Matthews said.

Junior Nicholas Dickinson, a friend of Matthews, has been a part of the group for around a year.

“I wanted to join because it sounded very interesting… a game where the rules don’t matter and can be changed,” Dickinson said.

Since then, Dickinson has grown to not only love the game, but the friendships he’s made within the group and the emotions they’ve experienced together while playing it.

“I enjoy when we… get so emotionally attached to it,” Dickinson said. “At one point, there were multiple people that cried over what happened during the game.”

While the group can’t be with each other in real life, they have still grown closer together.

“Overall, it brings us together and lets us escape into a reality where anything can happen, whether it is slaying a dragon, releasing an army of demons or having to beat up Santa Claus,” Dickinson said.

Matthews says that anyone interested in joining can contact him or any other group members. The group is always open to have new players, and there are no requirements to join.

“Everything is about the players and having fun,” Matthews said. “There is nothing wrong with not being a ‘nerd’ to try it out. It is accessible by anyone who wants to accept it.”