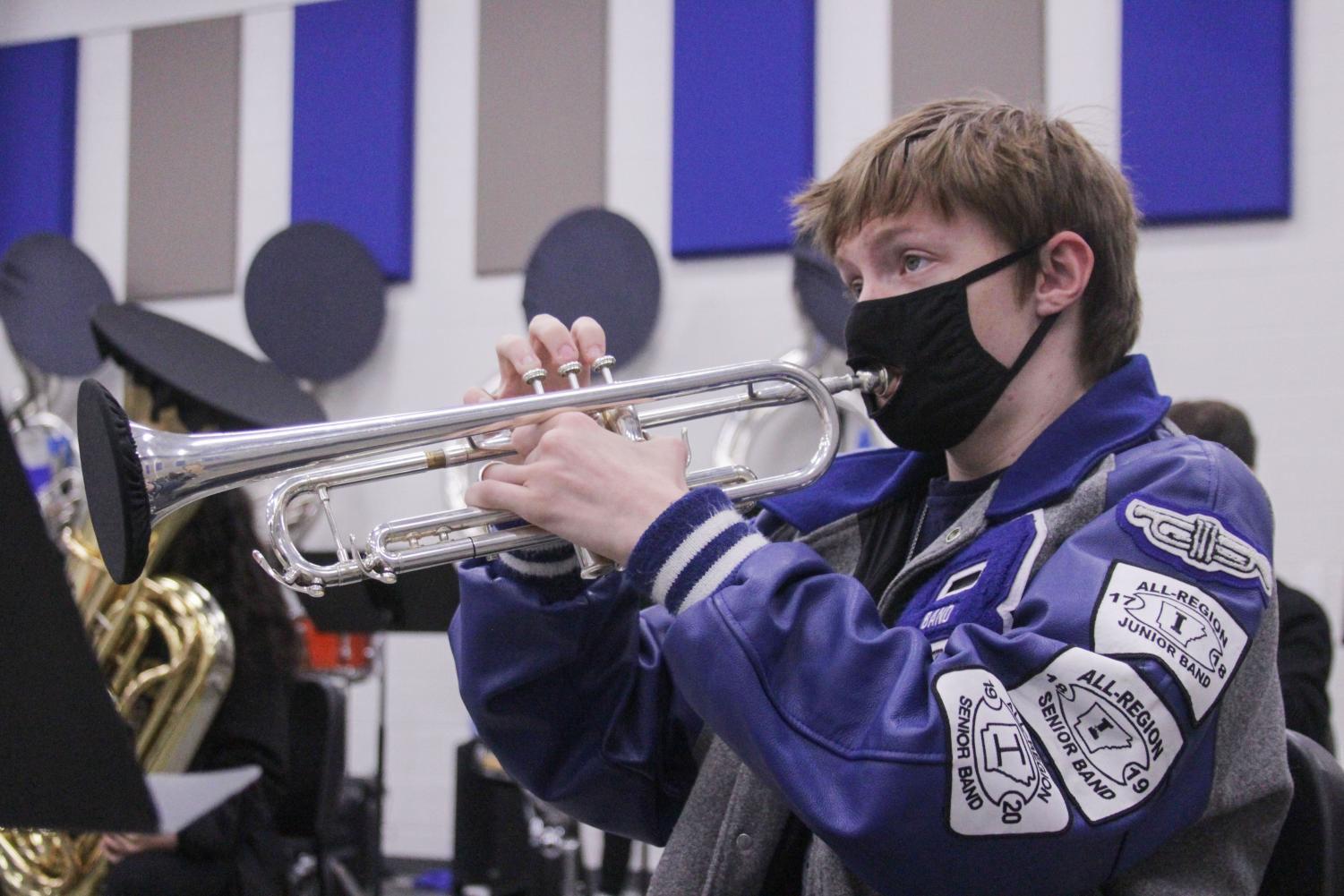 Wearing his band letter jacket, senior Stephen Snow plays his trumpet in Wind Symphony rehearsal Dec. 1. Snow made first band, ninth chair in All-Region auditions this year. “When people ask me how hard I practiced when it came to All-Region, I tell them I spend hours and hours going over the music, but the truth is that I’m just built different,” Snow said. (Emily Whittaker)

Wearing his band letter jacket, senior Stephen Snow plays his trumpet in Wind Symphony rehearsal Dec. 1. Snow made first band, ninth chair in All-Region auditions this year. “When people ask me how hard I practiced when it came to All-Region, I tell them I spend hours and hours going over the music, but the truth is that I’m just built different,” Snow said.

Due to the ongoing coronavirus pandemic, the auditions for Bryant’s All-Region Bands was altered to maintain the safety of the students auditioning. The audition process was moved to a virtual platform where students were able to record themselves and submit their audition pieces anonymously. Despite the different platform, 44 students placed in All-Region bands, and 29 qualified for All-State auditions.

In previous years, the audition process was in-person. First, students went into a room where they played their prepared music pieces, then they transitioned to the scale and sight reading room, while judges scored their pieces behind a black tarp.

Several students at Bryant have still decided to try out and signed up for the auditions, despite the different process they had to go through and even though the clinic this year will be held in a different form than usual. .

This was sophomore Kaity Barr’s  first year to try out on trumpet for senior high All-Region. Because of the difference in the process, Barr expressed her disappointment.

“I’m not really looking forward to All-Region,” Barr said. “I feel like this year, we were a little unprepared with practicing, and we didn’t necessarily get as many opportunities to practice in school.”

Barr said she feels like she is missing out on the experience of the  traditional All-Region tryouts.

“I would prefer [it] to be in person,” Barr said.  “I’m missing out on seeing other people from other schools and also hearing how they play.”

Although Barr isn’t excited for tryouts, she still feels like there are some pros to the new system.

“I think some advantages are that there aren’t three people sitting behind a curtain ominously, so it’s less stress,” Barr said.

Junior trumpet player Caitlin LaCerra liked the new All-Region changes and was excited for her auditions.

“I wasn’t really nervous, because I was already prepared on my music, so I was excited to see what the results would be,” LaCerra said.

Although many students felt that the audition process this year wasn’t as great as the in-person experience, LaCerra felt that it was better.

“It takes a lot of the nerves away from in-person, and when you record it, you get to run through your music a couple of times, and that was just so much better,” LaCerra said. “I did that for each exercise.”

Instead of holding a live clinic for the selected students to get together and play, All-Region is going to be a virtual meeting for students to listen to guest speakers talk about how they can improve as musicians and to inspire future musicians.

“The clinic is a Google Meet call this year,” LaCerra said. “I’m going to miss not getting to go to a clinic in person this year.”

Junior Nicholas Dickinson was also eager to  audition on his tenor saxophone.

“I was nervous a little bit because of prior mess-ups and stuff, but I was really determined,” Dickinson said.

Dickinson ended up with an improvement on his score compared to last year. However, Dickinson said that he had some technical difficulties with the audition process

“One of the cons [of the audition was] that my mic messed up a little bit,” Dickinson said.

“I was a little bit disappointed, because I got beat by someone, and I didn’t really expect that, but I’m looking forward to All-State tryouts,” Dickinson said. “Last year, I messed up at All-State, but this year, I won’t mess up.”