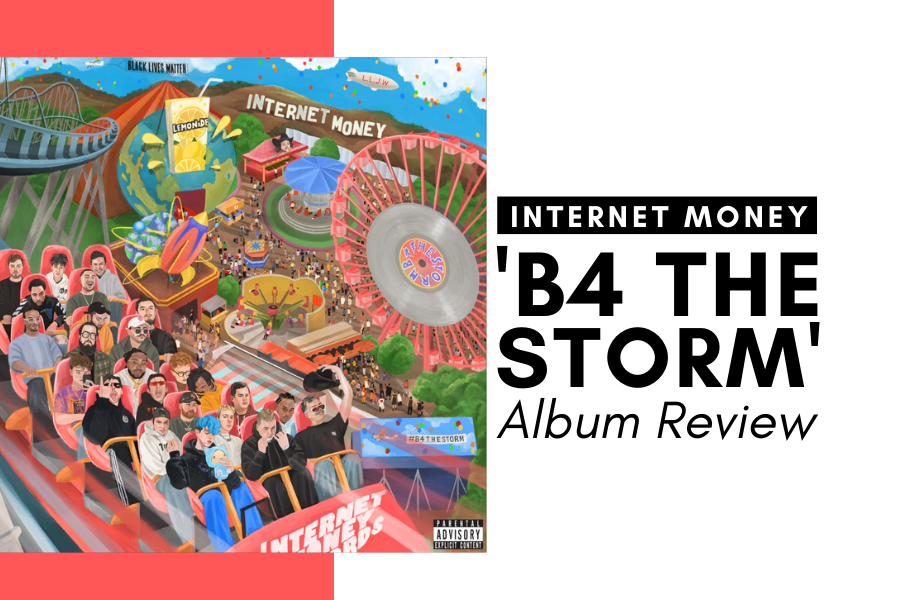 Internet Money’s “B4 the Storm” is a Monotonous Mess

Star-studded debut album is underwhelming; proves the production collective is selling out

Artistry, versatility and flair is everything LA production collective Internet Money is lacking in their debut album “B4 the Storm.” With features on every track from respected artists, satisfying the hype can be an intimidating task, but Internet Money completely misses the mark. Put together in two weeks, “B4 the Storm’s” lack of effort is apparent throughout the album.

The opening track, ‘Message,’ featuring TyFontaine, is the only stand-out track from ”B4 the Storm.” Vibrant arpeggiated synths instantly prepared me for what I thought would be an album full of body and compelling synthesizers.

But my excitement was instantly stifled as the second track on the album, “Really Redd,” featuring Trippie Redd, Lil Keed and Young Nudy played. The muddy chorus and verses performed by these esteemed artists is simply unsatisfying. Trippie Redd’s verses feel hollow and don’t reflect the uniqueness that makes Trippie distinctive. The melody doesn’t alter, but repeats the same synth sequence over and over again.

From “Really Redd” and beyond, monotony ensues, and the album is one repetitive song after the next. Instead of an enthralling excursion of unique sound kits and captivating drum patterns, “B4 the Storm” left me eagerly waiting for some variety, but to no avail. Instead, I was confronted with bass-lines and chords that follow the exact same progressions.

Internet Money is helmed by Taz Taylor, a “type beat” producer who was launched to internet fame through his YouTube channel, where he creates tutorials for beats using the digital audio workstation software, FL Studio.

“Internet Money” has expanded their resume to major artists in the rap game and produced the beats for songs such as Rich the Kid’s “Plug Walk,” Juice WRLD’s “Lucid Dreams” and Drake’s “Blue Tint.” While these songs had influence in the music production industry, Internet Money’s recent work has not evolved with the inconstant music scene.

Instead, they’ve remained dependent on the winning formulas they used to conquer the Hot 100 charts two years ago. Internet Money’s true motive is indicated by their name. They discovered the method to crafting a successful song and have continued to follow these techniques, devoting all of their focus to the financial rewards rather than the artistry.

Internet Money’s occupation of the billboard chart’s throne needs to be passed; they are doing nothing to revamp or vivify the music industry. They are stuck trying to recreate their previous rapid success and commercial relevancy, losing their virtuosity in the process. Instead of attempting to recruit every uprising music producer, they should allow the next wave of creators to introduce a new style and approach.

The incorporation of obscure subgenres in rap is causing a stylistic evolution and keeping redundancy obsolete. Constant change and growth is vital, and a pyramid scheme production collective leading the rap game is not what music needs.