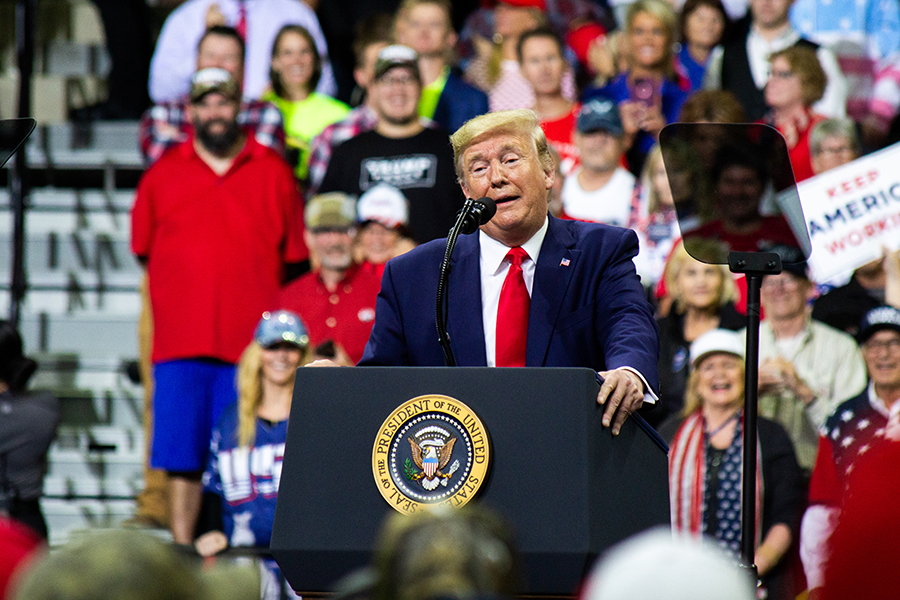 President Donald Trump addresses the crowd at Target Center in Minneapolis, MN, for his 2020 presidential campaign rally on October 10, 2019. Photo by Nikolas Liepins.

Impeachment Trial Comes to a Close

Trump acquitted on both articles of impeachment

After a 13-day-long-trial, President Donald Trump was acquitted on both articles of impeachment, abuse of executive power and obstruction of Congress, by the Senate Feb. 5.

The first charge, abuse of power, was rejected by the Senate with a ratio of 48 to 52. The second charge, obstruction of Congress, received a similar ratio of 47 to 53. Arkansas senators Tom Cotton and John Boozman, members of the Republican Party, were among those who voted against the charges.

In his remarks on the impeachment trial submitted to the Congressional Record, Cotton disagreed with the idea that Trump’s actions warranted impeachment and removal from office.

“When most Americans think about why a president ought to be impeached and removed from office for the first time in our history, I suspect that pausing aid to Ukraine for a few weeks is pretty far down the list,” Cotton said. “That’s not exactly ‘treason, bribery, or other high crimes and misdemeanors.’”

Instead, Cotton directed attention towards the Democratic Party’s discontent with Trump’s presidency as a catalyst for the impeachment trial.

“This round of impeachment is just the latest Democratic scheme to bring down the president,” Cotton said. “Simply put, the Democrats have never accepted that Donald Trump won the 2016 election, and they will never forgive him, either.”

John Boozman reinforced the decision to vote “no” on the impeachment articles in his speech delivered on the Senate floor Feb. 4. Boozman stated that the trial was unfairly conducted, contributing to his decision in joining the Republican Party in voting against the articles.

“Its inquiry was hasty, flawed and clearly undertaken under partisan pretenses,” Boozman said. “Based on the work done by the House – or, maybe more accurately, the work not done and the inherently flawed and partisan nature of the product it presented to the Senate – I was skeptical that it could prove its case and convince anybody apart from the president’s longtime, most severe critics, that his behavior merited removal from office.”

Although the votes nearly followed party lines, Mitt Romney, a Republican Senator from Utah, notably voted “yes” on the charge of abuse of power, becoming the first senator in the history of impeachment trials to go against his party in voting. Romney announced his decision to convict Trump in a speech on the Senate floor Feb. 5.

“I knew from the outset that being tasked with judging the President, the leader of my own party, would be the most difficult decision I have ever faced,” Romney said. “I was not wrong.”

While Romney rejected the accusation that Trump obstructed Congress, he held the belief that Trump exploited his position in the executive branch.

“The President is guilty of appalling abuse of public trust,” Romney said. “It was a flagrant assault on our electoral rights, our national security and our fundamental values. Corrupting an election to keep oneself in office is perhaps the most abusive and destructive violation of one’s oath of office that I can imagine.”

In September, the House of Representatives Intelligence Committee launched an impeachment inquiry against Trump based on a phone call he made to Volodymr Zelensky, the President of Ukraine, on July 25. Trump underwent investigation after an unidentified whistleblower within the intelligence community made a formal complaint expressing concern over the call.

In the complaint, the anonymous individual accused Trump of pressuring his foreign counterpart into investigating Hunter Biden, the son of Democratic presidential candidate Joe Biden.

The inquiry was then conducted by the House to determine if Trump withheld military aid in order to solicit information about Hunter Biden that would increase his chances of winning reelection in 2020. The call to Zelensky was held a few days after Trump blocked $391 million worth of military aid for Ukraine, and he denied claims that he used this as a bargaining chip to gain intel.

After a four-month-long investigation, the House approved two articles of impeachment Dec. 18, officially impeaching Trump, the third President in history to be impeached after Bill Clinton and Andrew Johnson. However, impeachment does not equal removal from office. Impeachment refers to the charges drafted against Trump.

Senior Ainslie Nolan initially believed Trump was no longer president after his impeachment was announced, but gained a clear understanding after her mother, who works as a lawyer for the Supreme Court of Little Rock, explained the situation.

“She does appeals, which I think made her more qualified to tell me about what was going on with the impeachment,” Nolan said. “She defined clearly that it was a process. It wasn’t like he was impeached and gone; it had to be passed through all these people.”

In order to decide whether Trump should be removed or not, the Senate then held an impeachment trial. The trial was presided over by Chief Justice John G. Roberts Jr. while all 100 senators played the role as jurors, casting their final votes at the end. In order to convict, ⅔ of the Senate, or 67 senators, must vote guilty.

The rules for how the impeachment trial would play out, proposed by senator Mitch McConnell, were approved Jan. 21. Resembling the schedule for Clinton’s impeachment trial in 1998, the House managers and Trump’s defense team each had 24 hours to present their cases, stretched over three days. There then was a two day questioning session by the Senate.

One of the most prominent characteristics of Trump’s senate trial was the lack of witnesses. The Senate voted “no” to allow witnesses in a ratio of 51-49 Jan. 31, blocking motions by Democrats to allow four new witnesses to testify. Among them was former national security adviser John Bolton, who agreed to testify if the Senate summoned him. As a result of this vote, the trial came to a quicker conclusion than if new witnesses and documents were submitted and approved, contributing to the controversy over whether the trial was fairly conducted.

Although Trump has been acquitted, Jerry Nadler, the House Judiciary Committee Chair, reported that the House will likely subpoena Bolton, or order him to testify.

Nolan believes that the impeachment trial will fail to have serious ramifications for America’s future.

“In America today, I feel like nothing people really say or do can affect people’s own opinions and their loyalty to certain parties,” Nolan said. “It’s too hard to change anything.”