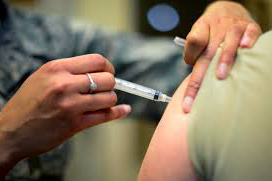 Influenza Season at Its Peak

In the height of influenza season, Arkansas alone has had 16,900 positive influenza tests from Sept. 2019 to Feb. 2020, according to the Arkansas Department of Health. Students with the illness faced harsh symptoms of fever, sore throat, body aches, fatigue, headache and more in addition to missing school.

Out of 94 students who responded to a Prospective survey, 17.4 percent have had influenza this season. However, a statement from Bryant School District released Feb. 6 indicated that overall attendance has been high enough to keep the district open.

“We have been monitoring our student and staff attendance rates,” the statement said. “Our attendance numbers across the district have shown a range of absences between 6-8 percent, with our current numbers around 7 percent. These numbers have not risen to the level to make it necessary to cancel school.”

In the statement, the district assured faculty, parents and students that necessary precautions would be taken to ensure the school remains a healthy environment for students to learn in.

“We want to do our part in keeping our Hornets healthy,” the statement said. “The nursing staff is working hard to identify any sick students and notify parents as quickly as possible. Our staff members have joined custodians in cleaning and sanitizing classrooms and common areas.”

Senior Kelsie Davis believed she had the flu after experiencing symptoms, although she was not officially tested.

“It started out with a sore throat, and that progressively got worse,” Davis said. “Then, I got really bad headaches, and my fever climbed up to 102.4 at some point. I also kind of had a cough. It was awful.”

With plenty of medicine to help, Davis was able to overcome the illness on her own after missing a few days of school.

“I didn’t [go to the doctor],” Davis said. “I missed a Monday and a Friday [of school], and it went through the weekend. I just persevered through it. I took pills for the flu and cold and lots and lots of cough drops.”

Twenty-five percent of students who responded to a Prospective survey dealt with strand A of Influenza, and another 25 percent with strand B. For senior Vanessa Northweather, it was both at the same time. She had to rely primarily on rest with a lack of help from medications.

“I got the whole ‘Shebang,’” Northweather said. “It was mostly a lot of hydration. I was on Tamiflu, but it didn’t do much, because I had both A and B. It really came down to a lot of hydration, eating and rest.”

If they are lucky, students might only miss a couple days while they recover; however, the majority of those who are out sick miss more, giving them a vast amount of makeup work and stress to return to. Junior Sydney Dettmer spent almost a week at home with the flu, missing numerous assignments and tests that had to be made up soon after her return.

“I missed four days of school,” Dettmer said. “During the week, I emailed teachers, and they sent me what they could, and then I had friends give my sister some work from similar classes. It took a while. I had to make up a bunch of tests, so I had to schedule stuff. For the most part, my teachers were lenient unless I wasn’t able to turn things in.”

A majority of students who responded that they had gotten sick with the flu, 55.4 percent, also said that they had not received their flu shot. However, 44.4 percent of these students believe flu shots to be ineffective. Dettmer believes flu shots are needed despite her misfortune of getting the flu after receiving her flu shot.

“The main reason I think it’s effective is because [my friend] Zak got both strands, and he didn’t get a flu shot, so I guess it’s mildly effective,” Dettmer said. “I just have bad luck I guess.”

To prevent the sickness from spreading as rapidly, Northweather encourages those who catch the flu or have any symptoms to stay home, and those that are at risk to ensure they are protected against it.

“[Parents,] don’t send your kid to school sick,” Northweather said. “That’s how I got sick; a lot of people around me were getting sick. Wash your hands, cover your mouth and take your Vitamin C tablets. Whatever helps.”