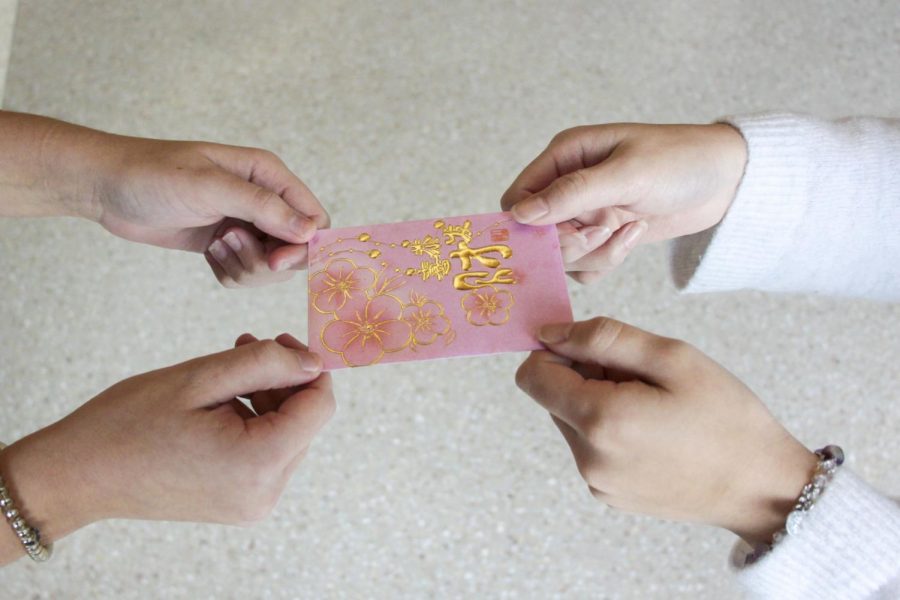 Traditions include red envelopes, time with family and friends

With the spirit of the New Year spreading, Asian countries await their new year celebrations with the lunisolar calendar.

The Lunar New Year, also known as Chinese Chunjie, Vietnamese Tet, Korean Solnal and Tibetan Losar, is a time to honor family, ancestors and heavenly deities. Lunar New Year typically begins with the new moon that takes place between the end of January and the end of February and ends on the first full moon of the lunar calendar.

“My family and relatives are Vietnamese, and we celebrate Lunar New Years, except it’s called Tet,” Tran said. “For years, we have just been celebrating Tet with each other and the members of the Vietnamese church we attend. There will be a potluck with good food, and then there’ll be a performance featuring the dragons and [a] ‘lucky man.’”

Lunar New Year consists of rituals and dances that remind Tran of the special holiday.

“A series of things pop in my head when I hear the phrase ‘Lunar New Year,’ Tran said. “The first and most obvious one would have to be the red envelopes. But the one thing that reminds me the most of Lunar New Year is the ‘lucky man.’. When I was younger, my church held events for Tet, and there would be a last minute dragon dance along with some teen wearing a mask of a man with big eyes and a large grin. I was very young, and the guy in the mask knew he had the power over these impressionable children, so of course he was going to shove his face in theirs and scare the life out of them.”

Dances and rituals remind Tran of the holiday, but senior Nga Nguyen, who lived in Vietnam for her entire life up until 2016, shares a connection to the holiday that reminds her of her home country.

“Since I’ve only been here for almost four years, I still miss Lunar New Year in Vietnam a lot,” Nguyen said. “I miss all of my relatives, friends and the way that they celebrate Lunar New Year over there. Also, my older sister still lives in Vietnam, and I wish to visit her during Lunar New Year one day.”

In Arkansas, the overall population of Asians is 43,441, which is around 1.5% of the population. However, in California, the population is around 5.4 million, and in New York, 1.6 million. Junior Devon Wang, a former New York resident, has seen the dynamics of both New York and Arkansas celebrating Lunar New Year.

“In New York, there’s definitely a larger Chinese population and several communities that celebrate it to a greater extent, but as for the way it’s celebrated, it’s typically not all that different as compared to Arkansas, or no matter where in the world for that matter,” Wang said.

Although Lunar New Year may be celebrated differently among the states, some believe that the Lunar New Year is dissimilar among Asian countries. Families clean up their houses 10 days before the holiday to sweep away the bad luck and adorn the houses with red and yellow decorations to bring in good luck.

“In Vietnam, before Lunar New Year, most families spend time cleaning up their house, decorating and buying food to serve for guests that will come to visit during the Lunar New Year,” Nguyen said. “They tend to go to their relatives’ house to give them good wishes on New Year’s day and give li xi [red envelopes] to the children. For the families who have lost their family [members], they will go to the cemetery and place flowers there to pray. In America, we mostly don’t have time to celebrate and just go to the festivals which is not exactly on the same day as the Lunar New Year in Vietnam. [However,] we still keep the tradition and celebrate it every year.”

“I feel like Lunar New Year also brings me back to my roots and makes ‘going into the new year’ something more than just resolutions that don’t stick,” Tran said. “Because I’m constantly surrounded by American tradition and constantly speaking their language, Lunar New Year gives me a moment of belonging with the other half of myself and my family.”