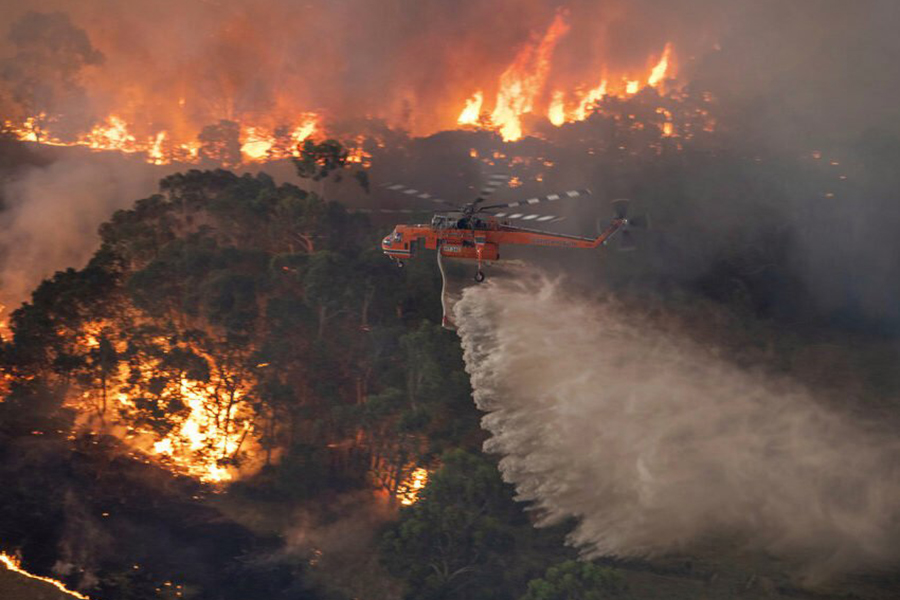 In this Monday, Dec. 30, 2019 photo provided by State Government of Victoria, a helicopter tackles a wildfire in East Gippsland, Victoria state, Australia. Wildfires burning across Australia’s two most-populous states trapped residents of a seaside town in apocalyptic conditions Tuesday, Dec. 31, and were feared to have destroyed many properties and caused fatalities. (State Government of Victoria via AP) (AP)

In this Monday, Dec. 30, 2019 photo provided by State Government of Victoria, a helicopter tackles a wildfire in East Gippsland, Victoria state, Australia. Wildfires burning across Australia’s two most-populous states trapped residents of a seaside town in apocalyptic conditions Tuesday, Dec. 31, and were feared to have destroyed many properties and caused fatalities. (State Government of Victoria via AP)

Billions of animals perish in flames

As the southern areas of Australia continue to burn, an estimated one billion animals and their habitats have perished.

It may be considered normal for bushfires to be seen in Australia; however, the fires present in recent months display a far greater extent of damage as the raging fires have killed off fauna, destroyed habitats and razed feral animals and predators, all with no end in sight. Current fires are considered some of the worst since the 2009 “Black Saturday” fires in Victoria, Australia.

Ecologist and Charles Darwin University professor Sam Banks resides in Darwin, Australia, where he studies Molecular Ecology and Conservation Biology. Prior to joining the university, Banks worked in Canberra at the Australian National University and researched forest management and fire and their impacts on Australia’s biodiversity. His research has shown the primary causes of the great number in fauna deaths aside from the fires themselves.

“Based on previous fires, we know that a lot of animals can be killed by the fire event itself,” Banks said in an interview with Prospective. “But it is often the post-fire environment, where food is scarce and the lack of shelter makes animals susceptible to predators, that is particularly challenging for animals in fire-affected environments.”

Already endangered species, including the long-footed potoroo, brush-tailed rock-wallaby and Kangaroo Island dunnart are steadily decreasing in numbers and face problems of predators and loss of habitats.

“[They] have all, or nearly all, of their habitat within the area of these recent fires,” Banks said. “These fires probably won’t cause their extinction, but they will be more susceptible to introduced predators like cats and foxes after the fires. High-quality habitat for the long-footed potoroo and other animals that prefer old growth forest as their habitat will become rarer if this kind of fire event becomes more common, which is what is predicted under climate change and what we are beginning to see.”

Specializing in Zoology, Evolutionary Biology and Physiological Ecology, California State University researcher Anna Doty understands the significant impact on Australia’s wildlife. While all animals are at risk, some face greater threats than others.

“Slow-moving animals will fare the worst,” Doty said. “For example, koalas can’t move very quickly; therefore, we would expect to see increased mortality within their populations. This is in addition to other animals that have strict habitat requirements or are slow-moving.” “Animals that may do well include those that are fast-moving or able to burrow. These include wombats, [which] make deep burrows, snakes and possums [that] may be protected in tree hollows.”

While the fires are harming the animals and their environments, there are some benefits to the bushfires that occur, but only to a certain extent. Banks believes fires are needed so long as they assist in the development of habitats and do not extend to destroying them.

“Fires are an important component of our forest ecosystems, because they create some critical habitat features,” Banks said. “Many of our forest animals dwell in hollows, and since we don’t have creatures like woodpeckers here [in Australia], fire can increase the future availability of hollows by killing trees that decay and form hollows. The best habitat for some species occurs in areas that have been recently burnt, and many of the plant communities that are favoured by recent or frequent fire provide important habitat for many animals. Having said that, it can take a long time for populations of some animals to recover from major fires like this.”

The rate at which the fires are burning can be blamed on climate change, with an increase in temperatures and lower amounts of rainfall. Doty believes climate change serves as a major contribution to the ongoing fires and as a hindrance to their typical benefits.

“An increase in average temperatures over time has caused an increase in the frequency, severity and extent of these wildfires in Australia,” Doty said. “We are seeing similar effects in California as well. Climate issues are not at the forefront of our major environmental issues worldwide.”

Lack of rainfall also affects the survival rates of species. Banks believes the effects of climate change may have lasting impacts on the animals.

“Low rainfall conditions make it more difficult for animal populations to recover from fire,” Banks said. “So the combination of more frequent fires, more severe and widespread fires and lower rainfall is likely to have major long-term impacts on some of our animal species.

Junior Lexie Ellis agrees that human-caused climate change is primarily what prevents the fires from ceasing and believes that the issue should be addressed.

“Everyone contributes to climate change, and climate change was part of the reason these fires were started,” Ellis said. “There were some man-made fires, but it spread as fast as it did because  it’s so dry there. It’s already the hottest year on record there for them, and that’s due to climate change, something we’ve all contributed to.”

Despite the ongoing issues of climate change, rapidly spreading fires and death of fauna, Doty believes the environment may be able to recover over time with necessary aid.

“There is hope for wildlife to recover from the fires; however, this will take a lot of time and appropriate management,” Doty said. “Therefore, it is largely up to us to help these animals. For example, many animals need connected habitat that allow them to move between patches of land. Additionally, we need to manage feral cat and fox populations to reduce predation.”

Junior Conner Rennels agrees that with the impact of these fires, help is greatly needed.

“It’s close to a billion animals now that have been destroyed by the fires, and a large portion of Australia,” Rennels said. “We should definitely contribute.”

Rennels believes many may contribute through donations and addressing the climate change issue because of increased awareness of the issue.

“I think everyone mostly knows about [the fires], but not enough people actually donate to the cause,” Rennels said. “If you’re not going to donate to the actual cause, then you can do things in your community to lower carbon emissions.”

Ellis agrees that everyone’s contribution is needed to aid the crisis, including those not directly impacted.

“It will take a lot of hard work on our part to help,” Ellis said. “I don’t think [the conditions] can improve without us. Australia has volunteers and animal resource people to help the animals, rescue them and send them back in the wild when they’re ready. In America, we can at least donate to wildlife organizations or volunteer organizations who help.”

Organizations to donate to and help:

If donations cannot be made, many contribute simply by spreading awareness of the issue and encouraging others to share and donate as well.