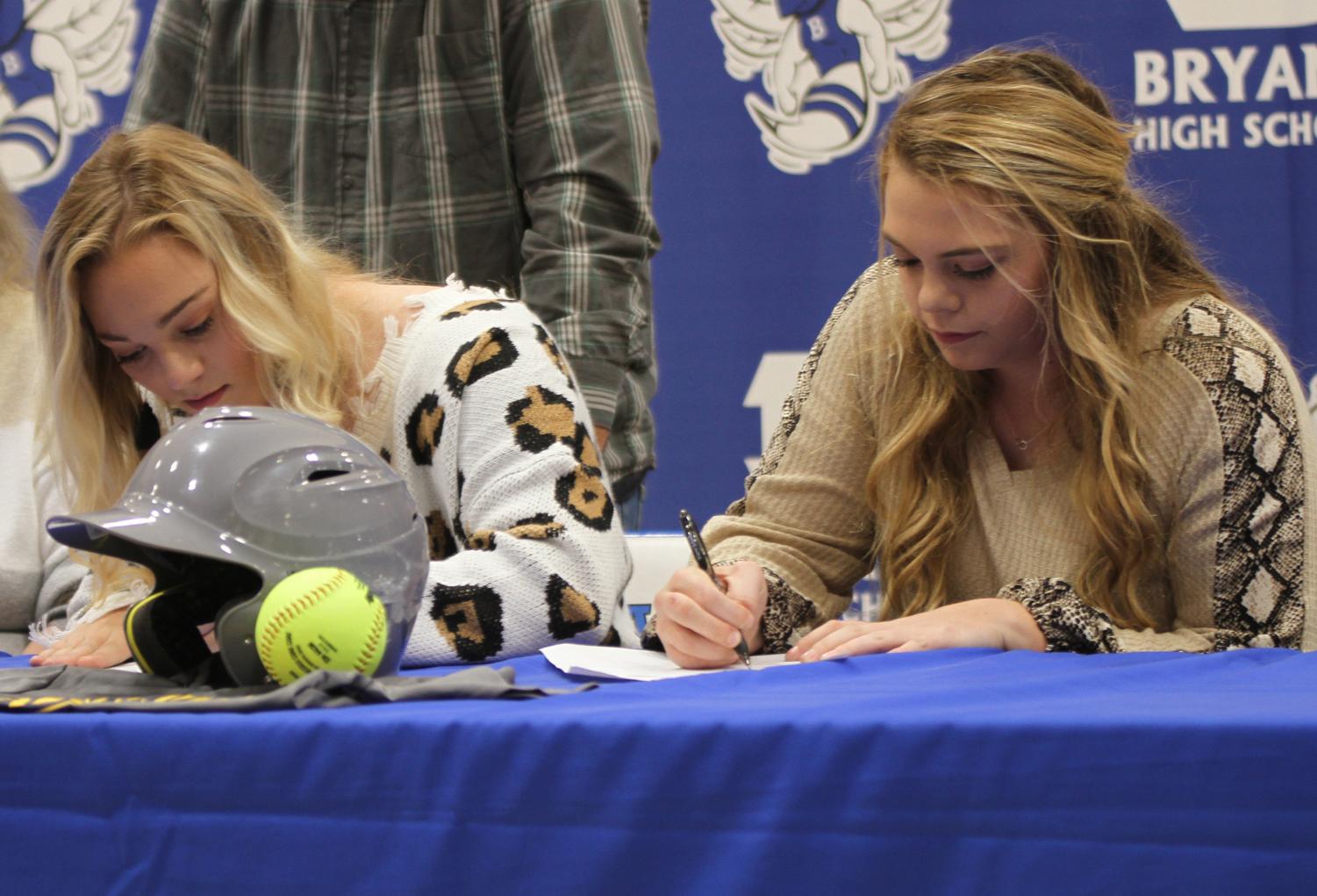 Being a senior can be the scariest time of a teen’s life. It’s the end of an era. The hardest goodbyes take place, and major decisions have to be made, often alone. However, seniors and best friends Haleigh Beck and Hannah Work received the opportunity to commit to SAU Tech for softball together.

Beck and Work have been best friends for eight years.

“We do everything together, like literally everything,” Work said. “She even lives with me sometimes. We are never apart.”

They met each other in fifth grade when they both attended Hill Farm Elementary.

“I was trying to be friends with one of [Haleigh’s] friends, and she kept telling her that she didn’t like me,” Work said. “After that, we were inseparable.”

Beck explains that their friendship seemed to come out of nowhere.

Work is looking forward to attending college with Beck, because it takes some of the stress away from leaving home.

“I like to be home all the time, and Haleigh is always with me,” Work said. “So, at least I’m not going to college with people I don’t know. I will literally have my sister and my best friend with me in the same room.”

Work jumped at the first opportunity to commit to SAU Tech for softball..

“I decided to go there, because it felt like home, and I liked that it was a small school because I’m going from [Bryant] to there,” Work said. “It was also the only offer that I got, so I was going to take it.”

Work has learned quite a bit from her experiences in softball.

Work was very much self-motivated when it came to softball.

“I worked hard, and if somebody told me I couldn’t do it, I did it anyway, and it worked for me,” Work said.

For Beck, playing softball in college was completely unplanned.

“It was kind of like a ‘God thing,’” Beck said. “I wasn’t going to go play college softball, and then [college scouts] just showed up to watch Hannah try out. They asked me if I played, and I was like, ‘Yeah, I play.’ They told me to go get my stuff and that they would watch me.”

Beck and Work say their  dads had big impacts on their lives.

“My dad has taught me the most in softball, and he’s definitely believed in me the most,” Work said. “Not only as a dad, but as a coach. He tells me when I need to work harder, and he tells me when he’s proud of me.”

Beck claims that her dad is one of the people who inspires her most.

“I look up to my dad, because when I wanted to give up, he would make me go home and work through it,” Beck said. “[Softball] has taught me a lot of maturity. I’ve had to grow up and be the bigger person in situations and push through.”

In the future, Beck intends to go into the medical field and become a surgeon. Work wants to transfer to a four-year college after SAU Tech and become a teacher and coach. They say that softball has taught them a lot of lessons through hard work and determination.

“Don’t quit,” Beck said. “It’s going to get hard, and there’s always going to be that one person who thinks they’re better than you, but just show them that you are equal and push through the hard situations no matter what.”