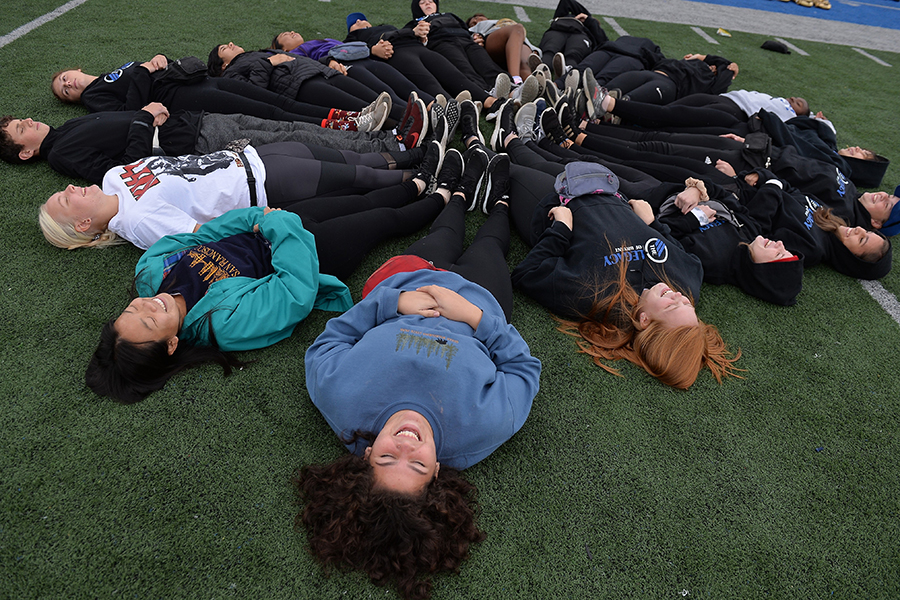 This past marching season, the Legacy of Bryant marching band had the opportunity to perform in Lucas Oil for the BOA Indianapolis Super Regional competition.

In 2009, the Legacy went to BOA in Indianapolis, scoring well under the usual placement of the band now. After the band’s ten-year absence from Lucas Oil, the band has gone from scoring 23rd out of 30 bands to 28th out of 84 bands.

For Jay Chipman, the percussive arts coordinator and associate band director of seven years, the results from the trip were very pleasing.

“The competition this year was particularly more fierce compared to last year,” Chipman said. “I am familiar enough with many of the groups participating in Indianapolis this year to know we stood a good chance of falling somewhere into the 30s. When I read we landed at 28, I was thrilled.”

Looking back on how the band has progressed as a whole the past few years, the changes have been drastic, but the score from last year’s BOA performance at St. Louis went up by one point.

“Many people might expect our score to rise significantly each year that we progress as an ensemble,” Chipman said. “But what some may not realize is that bands are getting better everywhere. If everyone but us stayed static, our score could potentially have risen into the 80s.”

While Chipman is the director over the percussion section, he is also the father of the center snare, senior Hayden Chipman. This trip was memorable in more ways than one.

“Getting to watch my students perform inside one of the most revered venues in the country gave me chills,” Jay Chipman said. “I literally had goosebumps throughout their show as I watched from the sidelines. I might have teared up a little knowing that my own son experienced this his senior year.”

After the competition, he took some time to talk to Hayden about it.

“I just remember asking Hayden about how it felt to know that not only is this the last time you get to march in a BOA competition, but you did it in Lucas Oil,” Jay Chipman said. “The huge smile and giggle from him was enough for me to realize where the culmination of the last three years of marching band has brought us. It was emotional for me. [That’s] why I’m so proud of the team he has worked hard to lead to this moment.”

Chipman also spoke to sophomore Andrew Morse about the competition.

“[Morse] explained that for the first few moments of the pre-show, he completely forgot everything he learned up to that point,” Chipman said. “But once downbeat of the opener hit, he went on autopilot.”

The intimidation factor of Lucas Oil can push through to the performance.

“It’s truly a joy to know that these students are trained to handle these situations,” Chipman said. “The whole group handled this show like champs. It was the best run yet, and I am extremely proud of how they all put on a theatrical performance.”

For Hayden, this was the last BOA performance he will be a part of.

“It sucks knowing this is my last year marching forever,” Hayden said. “It makes me excited for the next drumline, because I know they are going to do great.”

While many students were somewhat disappointed with the band’s placement, Hayden was not.

“I thought everyone performed the best they could,” Hayden said. “In my eyes, [that] makes it the best performance.”

Along with the help of the directors, the band has had help from interns and techs. Holden Jones, a student intern from Arkansas Tech in Cabot, has been interning with the band to complete his college credits.

“I wanted a place close to Cabot, and the best band program in an hour radius was Bryant,” Jones said. “I’ve always heard good things about Bryant bands, so that was an obvious choice for me.”

Throughout the marching season, Jones has seen incredible growth from the students.

“Half of [them] were just playing super square, no articulation, no dynamics,” Jones said, “and now [they’re playing] a freaking show.”

Jones went on the Indianapolis trip with the band. Along with getting to know the students more, Jones spent time with the parents as well.

Along with the other directors, Jones was proud and impressed with the band’s overall placement.

I think [the placement] was great, being 28 out of 80 something bands is in the top third,” Jones said. “[This has] probably been one of my favorite marching seasons so far to witness.”

Over the season, Jones has bonded with the students and has become somewhat of a meme icon. Jones has been featured in many memes on the Bryant Band Memes Instagram account. While Jones was at first confused as to why he was so idolized, he has come to accept it.

“When I came here, I had gone through a really dark summer, and [the kids] just surrounded me with love and affection that I wasn’t really getting in my personal life,” Jones said. “It was kind of overwhelming at first, but now I just really enjoy getting to come somewhere I’m beloved and people care about me.”

Having only a semester to get to know the students, Jones is essentially cramming a few years of band into one single semester.

“The big reason I want to be a teacher is to make the connections with [students] and be someone [they] can look up to,” Jones said.

Jones’s last official day is Dec. 3, but he will be staying until the Christmas concert.

“I’m really sad to leave,” Jones said. “I will probably cry on my last day.”

While the Indianapolis trip was an overall success, a week after the band arrived at home, they performed at the Arkansas School Band and Orchestra Association (ASBOA) State Marching Contest. Breaking their three-year streak of placing third, the Legacy came in fourth place, with just under a two point difference between them and the third place band.

While placement at state is something that all of the students want from the end of the season, that was not competitive band director Josh Gardner’s main priority.

“I don’t care [how we place,]” Gardner said. “It’s been tough, because I’m a really competitive person, and I preach the idea that you shouldn’t do something like this for first place. It’s been hard for me to take a step back and say if we don’t medal, that’s fine.”

Compared to last year, Gardner says the band has grown in talent, and so have the other bands in the state.

“All the bands in our area are getting better because of this competition,” Gardner said. “We’re all driving each other to get better.”

Many students felt disappointed about the placement at state, but Gardner says the overall feeling of the now-finished season is contentment.

“I think that this has been the best year for marching band in Arkansas,” Gardner said. “[The kids] have worked so incredibly hard this year and have come so far that numbers don’t mean anything.”

Regardless of placements, Gardner is inspired by his students and their musical talents.

“It’s been a great season that never in my wildest dreams would I have thought we would make the jump we made this year,” Gardner said. “Seeing the attitudes of the band and seeing how positive everyone is and how much they want to be good at something is inspiring.”