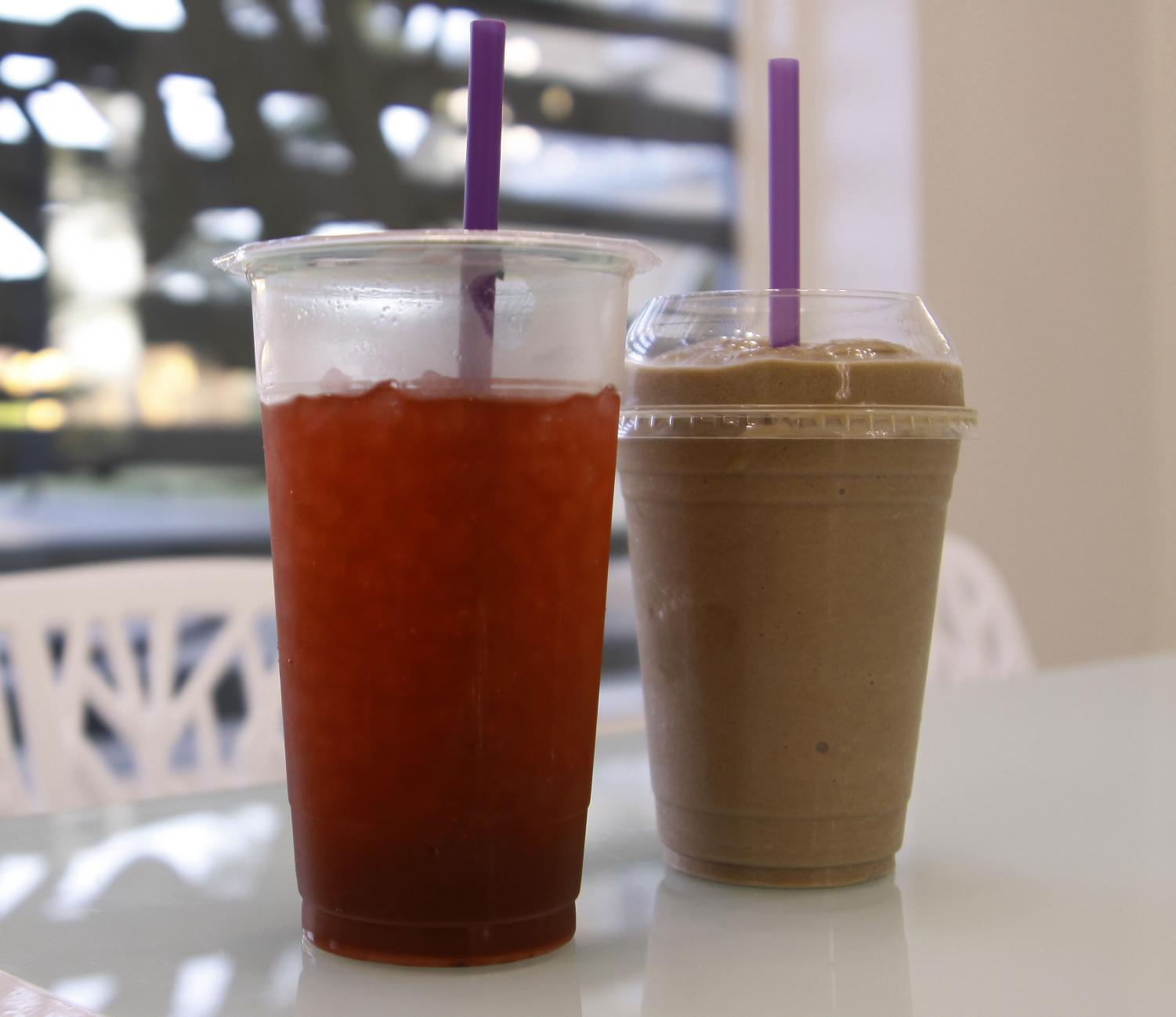 This story originally appeared in the October 23, 2019 print edition.

With a sleek style and friendly atmosphere, the Nutrition Nest on Reynolds Road is a new hot spot for students.

The business, opened and owned by Erika Bean, sits almost directly outside the high school, next to the Joanna A. Boutique. It is frequented by students and teachers alike, as they get a one dollar discount when they purchase any shake or tea.

The nutritional supplements included in the menu items at the Nutrition Nest are Herbalife products. Herbalife is a global nutrition company that began in 1980. It is the third most profitable multi-level marketing (MLM) company of 2019 with revenue of $4.5 billion dollars, according to mlmnewsreport.com.

As an MLM company, Herbalife uses sales representatives, which they call “preferred members” and “distributors,” instead of stores to sell their products. Product prices range from $25 for some single products to over $200 for package deals.

In July of 2016, a lawsuit settlement involving Herbalife required that they pay 200 million dollars to sales representatives who had lost substantial amounts of money selling their products. In a press release, the Federal Trade Commission (FTC) explained why Herbalife was involved in the settlement and what they will need to do to continue their business.

“This settlement will require Herbalife to fundamentally restructure its business so that participants are rewarded for what they sell, not how many people they recruit,” FTC Chairwoman Ramirez said. “Herbalife is going to have to start operating legitimately, making only truthful claims about how much money its members are likely to make, and it will have to compensate consumers for the losses they have suffered as a result of what we charge are unfair and deceptive practices.”

There have also been medical concerns, with claims of potential liver damage when using Herbalife products. An editorial for the Journal of Hepatology written by Felix Stickel, a doctor at the Institute of Clinical Pharmacology at the University of Berne, discusses two cases–one in Israel and one in Switzerland–claiming severe liver injury in conjunction with intake of Herbalife products.

There were 22 cases of liver damage that followed the intake of Herbalife products, and within that report, the two patients in Israel and Switzerland developed “fulminant hepatic failure.” In another five of the cases listed, the link between the liver damage and Herbalife was labeled “certain,” and it was labeled “probable” in the additional 13 patients.

Bean says she opened the Nutrition Nest, equipped with free Wi-Fi and a chill atmosphere,  as a safe space for teens. There are also students working at the business in conjunction with the school’s internship program.

Bean says her love for nutrition clubs started when she needed to lose weight. Her friends led her in the direction of a nearby nutrition club.

“I was 342 pounds,” Bean said. “I fell in love with the nutrition club [atmosphere] and the concept of what it represented for the community. I opened my first nutrition club, and now we opened over 15 in the past five years.”

Bean has been working with Herbalife products for her entire run with nutrition clubs.

“Everything is all-natural, and [the company has] been around for 39 years,” Bean said. “We’re the number-one nutrition company in the world. We’re in 94 countries.”

Bean says she is a proponent of Herbalife products due to the natural and plant-based ingredients the company uses.

“It’s healthy energy the students [can use] to focus, but also get a good healthy meal,” Bean said.

Bean was a part of the company during the 2016 Federal Trade Commission lawsuit regarding lost revenue for distributors.

Bean does not believe that Herbalife products are harmful despite the medical findings to the contrary.

“That’s completely untrue,” Bean said. “A lot of people have preexisting stuff and [do] not know it. You’ve got to think about it, we are an eight billion dollar company, and there’s two accusations over 39 years. Any company is going to have ridicule.”

However, while Bean does not believe these accusations, Stacey Finch, the director of clinical nutrition at Arkansas Children’s Hospital, says that the overuse of herbal and dietary substances can be inherently dangerous. She notes that while many dietary substances can cause medical issues, the specific ingredients that cause problems are currently unknown.

“It has been speculated that the added herbal components can be the main issue, which are not regulated by the Food and Drug Administration,” Finch said.

While nutritional supplements are not currently regulated by the FDA, they used to be somewhat regulated up until 1994.

“At that point, Congress defined the ‘dietary supplement’ as a product taken by mouth that contains a ‘dietary ingredient’ intended to supplement the diet,” Finch said. “At that point, nutrition supplements fell into the category of foods instead of drugs.”

Because these products are no longer FDA regulated, Finch advises those who regularly take nutritional supplements to look into the products before constant use.

“I wouldn’t recommend anyone taking anything that they don’t know what is in it,” Finch said.  “With regards to nutrition supplements containing herbal ingredients, I would recommend asking a physician or pharmacist about the safety of the product first.”

Finch especially recommends that minors utilize these substances with care.

“Nutrition supplements can be safe for minors to consume if you are sticking [to] the basics—milk, soy, or juice as the base of the supplement,” Finch said. “Be wary and careful of additives, however; not only herbal additives, but excess protein as well. While protein is needed by the body, too much can actually cause damage to the kidneys.”

Many teens use nutritional supplement shakes or teas as regular meal replacements, which Finch does not recommend.

“Perhaps utilizing a nutritional supplement for a meal replacement one meal [or] day would be safe, but certainly not more than that,” Finch said. “Children, teens and adults need to get the majority of their nutrition—vitamins and minerals included—from whole foods whenever possible.”

As a registered dietitian, Finch has concerns regarding nutritional and dietary supplements.

“While certain dietary supplements can be very beneficial—such as a calcium supplement for someone who doesn’t consume adequate dairy, I wouldn’t recommend for anyone, adult or teen, to supplement their diet with anything that a physician hasn’t said that they’re deficient in,” Finch said.