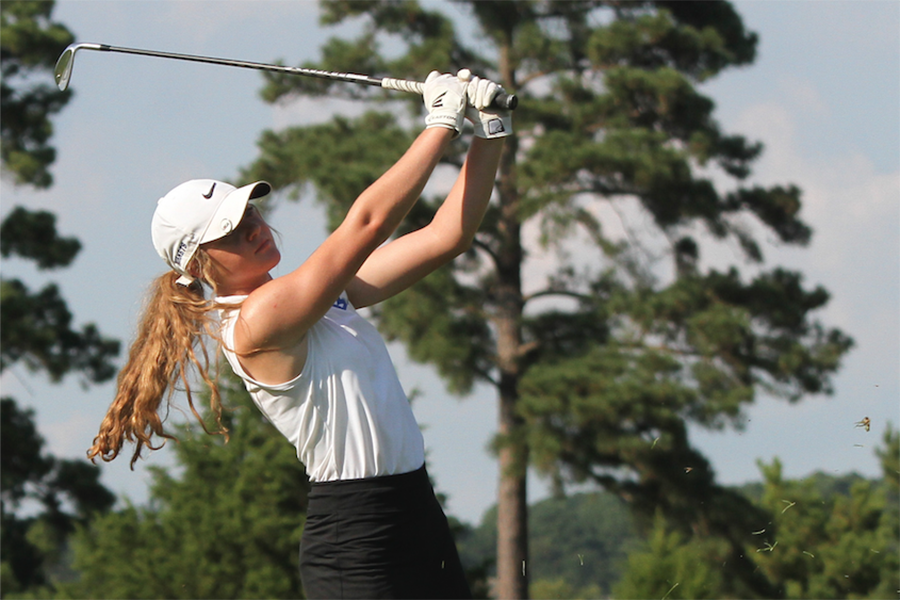 Ever since she was little, sophomore Caitlin LaCerra has enjoyed being involved. In her second year of high school, not much has changed, as LaCerra is committed to golf, softball, band and four advanced placement classes.

LaCerra began playing softball when she was seven. Now, LaCerra plays left field and is a left-handed slapper for the Lady Hornet softball team, and according to head coach Lisa Dreher, plays a significant role in the success of the team.

“Last year, she was our lead-off hitter,” Dreher said. “We started off many games with her on first base.”

It is not just her performance in the outfield or the batter’s box that makes her an impressive softball player, but also her ability to put in an above-average amount of work into the sport, despite the demands of other classes.

“She puts more time in than the average player during season,” Dreher said. “If she’s having issues, she does what it takes to work it out. I have no problem with her work ethic.”

Just like softball, many hours of practice and focus need to be dedicated to band, golf and her classes. However, LaCerra’s father Chris LaCerra says that she has no problem finding the motivation to put in the extra work.

“Caitlin is very competitive, and she motivates herself to be the best she can be at whatever she does,” Chris said.

Caitlin says that her parents have impacted her decision to choose so many activities, and they only offer positive support to her and her busy schedule.

“They’re a big part of why I do all the things that I do,” she said. “They’re really nice and encouraging.”

Even with the extra support and motivation, all the demands of sports and band leave Caitlin with little time after school dedicated to personal life.

“I go from softball to golf,” she said. “And then when I get home, I practice my trumpet after I get done with all my homework. Some days I don’t have time to practice it, because there’s so much homework.”

Even though her weekdays are filled with the stress of homework, softball, golf and band, her hard work pays off, as she is able to dedicate her weekends and any extra free time to hobbies and even vacations.

Some might argue that the amount of work is too stressful and outweighs the positives of being  so involved, such as college recognition and an impressive reputation, but even with all the challenges, Caitlin would not change a thing.

“I think it’s fun to do all the things I’m doing,” she said.

LaCerra’s parents also find her many activities fun and are proud of their daughter.

“We are extremely proud of Caitlin,” Chris said. “She works very hard to achieve her results. She always puts her team and teammates ahead of any personal recognition.”