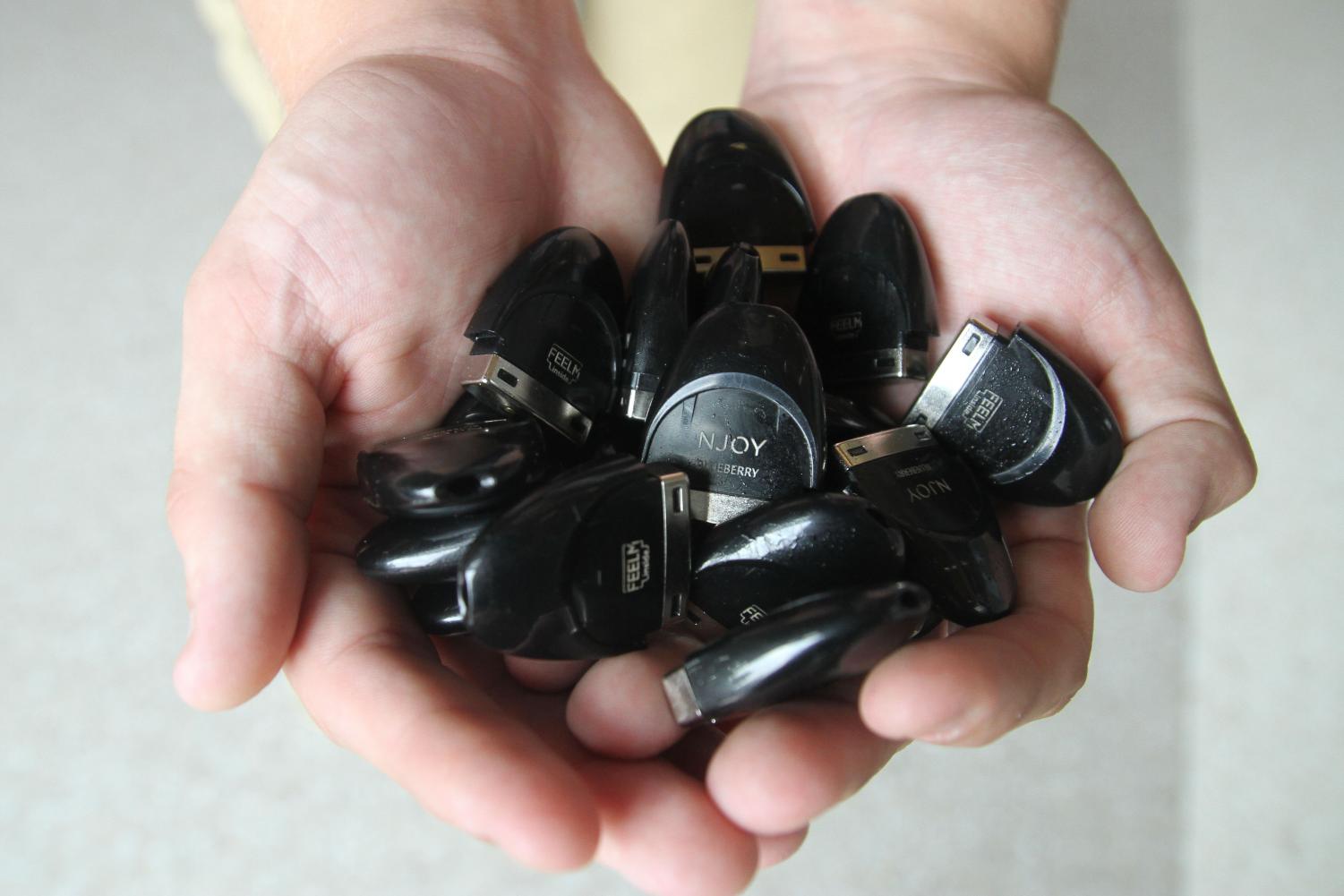 E-cigarettes, commonly referred to as vapes, mods or JUULS, hit U.S. markets over a decade ago as a seemingly safer option to traditional cigarettes. Because they lack tar and other carcinogens contained in traditional cigarettes, , e-cigarettes have been praised as the better alternative, especially among youth. However, health experts have recently been attempting to shed light on recent deaths that may be linked to vaping.

The Center for Disease Control and Prevention reported that since 2018, over 3.6 million teenagers and young adults reportedly used e-cigarettes, making them the most common tobacco product among U.S. youth. Among these teenagers is junior Brent Fee, who began vaping freshman year.

“I was super against nicotine,” Fee said. “Then someone was like, ‘Hit this JUUL, it gives you a really cool feeling,’ so I hit it.”

As nicotine enters the body, it reaches the brain in a matter of seconds and releases chemicals such as dopamine and serotonin,which induce sensations of pleasure. When nicotine does not enter the bloodstream after long-term consumption, users typically experience nicotine withdrawal. After vaping for a year, Fee quit for a month and began to experience symptoms of withdrawal.

“Every single thing irritated me,” Fee said. “Everything made me want to snap. No food tasted good. I just felt like I wanted to do nothing, but [I] also wanted to do something. It was a really confusing feeling. It was horrible.”

Nicotine is not only highly addictive, but it can also impair brain development in adolescents, hindering the ability to focus and learn. The MD Anderson Center also reports health consequences such as increased coughing and wheezing, worsening of asthma, chest pain and a rise in blood pressure and heart rate. However, more serious vaping-related complications have been reported recently.

Beginning in July of 2019, over 450 vaping-related lung illnesses across 33 states have been reported, along with 17 deaths. The illness is accompanied by symptoms of nausea, fatigue, weight loss and improper breathing. Joining the ongoing investigation, the Arkansas Department of Health is currently investigating. In KNWA’s recent article “Arkansas Department of Health Investigating Possible Vaping-Related Lung Illnesses,” the Arkansas state chronic disease director Appathurai Balamurugan commented on the surging issue.

“We are encouraging clinicians from across the state to reach out to Arkansas Department of Health if they encounter patients with this illness and a history of vaping to help us better track, treat and understand these illnesses,” Balamurugan said.

However, pinpointing a concrete cause for these sudden concentrations of illnesses and deaths still remains complicated. Many of those who have been hospitalized, usually teenagers and young adults, reported using vaping products containing THC oil: the intoxicating ingredient of cannabis. However, some of those who have fallen ill reported only vaping nicotine. Bootleg vaping products and possible issues with local suppliers have also been highlighted as probable causes.

“It’s kind of like the new smoking of our generation,” Althen said. “I find a lot of people our age who say [traditional cigarette] smoking is revolting and they would never do it, but they still JUUL, and that’s still awful for you.”

In response tothese vaping-related illnesses, health experts have cautioned against using e-cigarettes, especially those purchased from unlicensed vendors. With e-cigarettes being a relatively new product, the long-term consequences associated with their use still remain unknown.

“I wish more people knew what they were talking about when they get into that kind of stuffand [realized] how harmful it actually is,” Althen said.

As vaping-related deaths and illnesses persist, the Trump Administration recently announced a proposed nationwide ban on flavored e-cigarettes. The administration aims at reducing the amount of teenagers vaping due to flavorings. However, some states have already begun initiating bans, with Michigan being the first state to prohibit flavored e-cigarettes and New York looking to follow in their footsteps.

The Food and Drug Administration, who has been hammering on the vaping industry for illegally marketing vaping products as safer than traditional cigarettes, put their support behind Trump’s comments. Planning to soon cement a compliance policy outlining authorization requirements for flavored e-cigarettes, the FDA hopes to reduce unauthorized products on the market along with vaping rates among youth.“The tremendous progress we’ve made in reducing youth tobacco use in the U.S. is jeopardized by this onslaught of e-cigarette use,” FDA commissioner Ned Sharpless said. “Nobody wants to see children becoming addicted to nicotine, and we will continue to use the full scope of our regulatory authority thoughtfully and thoroughly to tackle this mounting public health crisis.”