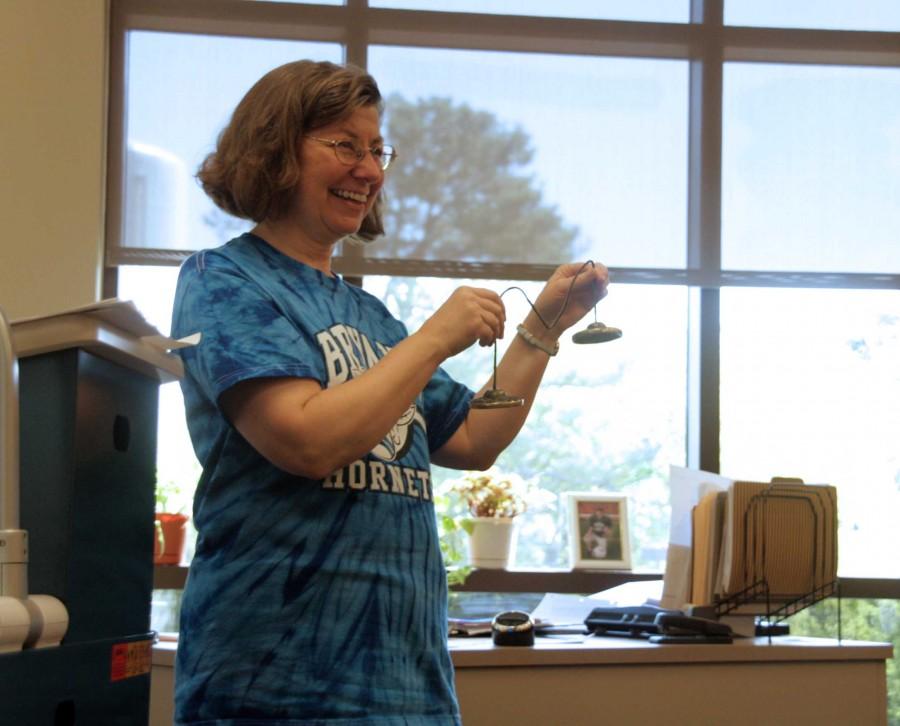 Doctor Andrea Sadler uses one of her special techniques, the bells, to help teach in her Algebra 3 class.

Like most students, Dr. Andrea Sadler, a math teacher, was indecisive of what she wanted to do with her life. Eventually she discovered what she’s always wanted to be, but she didn’t start there.

Sadler grew up in Chicago. After high school she got into college and attended the University of Illinois. But she started out at the Art Institute in Chicago majoring in, of course, art. That didn’t feel quite right for Sadler, so she changed to a different major, music. Then she graduated from the Paul School of Music.

Eventually, after trying art school, and music school, Sadler finally decided to become an engineer. She earned her doctorate degree in chemical engineering, after she had acquired a degree in music.

Loaded with an assortment of different degrees, Sadler set off to find herself a job. One of the many skills that Dr. Sadler has is that she knows how to stabilize a nuclear device. Unlike most students, Sadler can play the piano and even the harp. She also has engineer research skills that most adults do not have.

“The district here is more organized than some that I’ve taught in in the past. The staff are very friendly and helpful, so the transition was quite easy,” Sadler said.

When she was visiting her son in Australia, Sadler volunteered for a bat rescue clinic. She wanted to help the animals and it was a challenge that not many people have experienced.

“Tiny baby kangaroos were hopping around my ankles as I chopped fruit off of the trees for the bats. It was absolutely breathtaking and beautiful,” Sadler said.

Whenever Sadler was in college, she had to take care of a son; one of the many challenges that most people don’t have to handle at that young. David was that son, and now he is living his own life in Australia.

“Things can be hard, but you can succeed. When I was getting my undergraduate degree my son was little, and I had a child to take care of. I did it, and you can do it too.” Sadler said.