What Happened at the Travis Scott ‘Astroworld’ Tragedy? 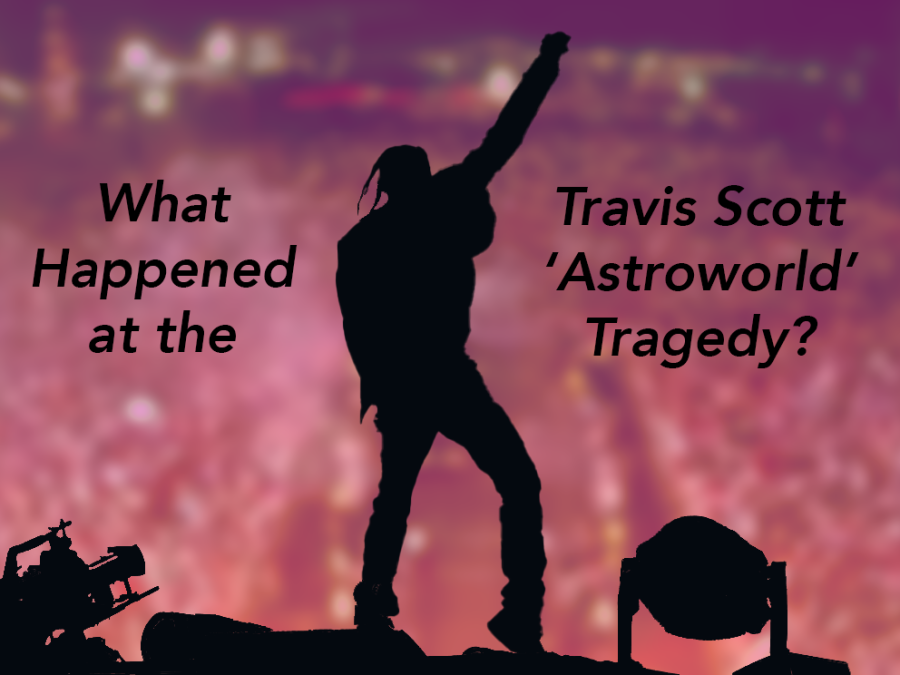 On November 5, Travis Scott’s annual two-day festival ‘Astroworld’ debuted at NRG park in Houston, Texas. At around 9:00pm, Scott took the stage and a crowd surge, where a crowd that suddenly moves forward and can result in a collapse, began. In the group of 50,000 fans, hundreds of people were injured and ten died from cardiac arrest and being trampled, the youngest victim being 9-years-old. The concert didn’t stop until forty minutes after people began fainting and pleading for help.

Since the tragedy, more than 300 lawsuits have been filed against both Travis Scott and the ‘Astroworld’ concert promoter, Live Nation. Environmental and biology science teacher Storm Archambeau has been to several festivals and has experienced concert surge before, but has never experienced a surge with the intensity of the November 5 concert.

“I was able to get myself and my wife out of those situations, but I can see where smaller people would have had difficulty,” Archambaeu said. “I saw Travis Scott perform at ‘Voodoo Fest’ when he replaced Childish Gambino. The crowd that night was nothing close to ‘Astroworld’. As a parent and teacher now, I cannot imagine the regret that those parents must feel letting their kids go to something not knowing they would never see them again.”

Scott has been arrested twice in the past five years on charges of prompting crowds to jump barriers and overrun security. At his 2019 festival, three people were injured and hospitalized for this reason. Hours before the November 5 concert began, people were already jumping the barricades of the venue, pushing themselves to the front of the stage.

“Whenever population cannot be controlled, an event should and needs to be rescheduled,” Archambeau said. “There was no confirmed number for the population that was there. Again, the set up was designed for an x amount of people and when that number was surpassed it should have been canceled preemptively.”

Audience members began passing out around 9:30pm, including father Trenton Blount, who was holding his 9-year-old son, Ezra Blount. Ezra was trampled and died 10 days later from brain, liver and kidney trauma. With reporting on deaths and injuries in the incident, students have begun to question concert environments and whether their safety will be ensured.

“I’ve never really been to a concert so I’m not really sure how they’re operated, the performance aspect, etc,” Gilmore said. “The only thing that’s changed upon my view is how hectic [concerts] can get. I most likely won’t attend a concert unless I was invited.”

Moving forward, artists and festival planners are searching for preventive actions to ensure that no similar tragedy occurs at a concert again. Concert organizers are planning to enhance security measures and are also considering gated sections.

“I feel like what happened at ‘Astroworld’ had been coming for a while,” Archambeau said. “When I discussed it with my students, I approached it in a way that just asked them to be conscious of their surroundings if they choose to put themselves in a similar situation. The biggest takeaway I have from it is age requirements and population control for huge events like this. If festival organizers do not consider that as the main precautions similar events will happen at some point.”

A criminal investigation conducted by the Houston police has been enacted, but the question of who is responsible for the deaths has remained open to discussion. Senior Shamarion Gilmore feels that both Travis Scott and his crew should be held responsible.

“The crew members have the same amount of power as Travis Scott to make an announcement and stop the show,” Gilmore said. “[If] you see a large SUV or ambulance in the crowd trying to get somewhere, there should be an initial thought that something is severely wrong. Other than those lawsuits, I don’t think he’s going to get in any other type of trouble,” Gilmore said. “In a sense, It’s not like he went out stabbing those people, but he did influence that type of behavior in that concert. So that’s the toughness of it all, you can’t really blame anyone because it was the crowd itself.”