Bryant Theatre Goes “Into the Woods” 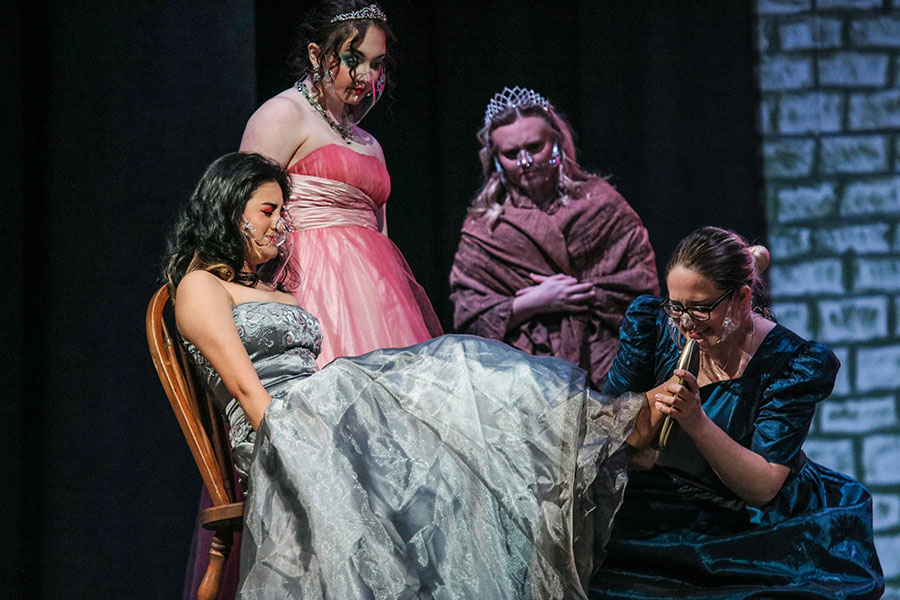 Forcing a shoe onto senior Sophia Ocampo's foot, senior Kaylee Bakeman portrays Cinderella's step mother while seniors Molly Austin and Makayla Shipe look on in the Spring Musical production "Into the Woods" March 12. Ocampo stepped into the role of Lucinda one week before premiere. "I did stress me out a tad bit, getting moved to a different part the day before the show is a little hard. Lucinda was not a big role, but it was scary," Ocampo said.

Putting a modern twist on the Brothers Grimm fairy tales, the school’s theater department brought the musical “Into the Woods” to life in their spring show. With intricate music and writing, the crew pulled off a unique show and sound.

With this being my first experience watching a play in-person,  I had high hopes for the performance. The department did not disappoint in the slightest. As the opening scene created whimsical ambiance with fairies dancing around the stage, the “Into the Woods” book was displayed. Although this scene was a bit confusing to understand at the beginning, it slowly began to fold out after the book came more into view.

The play further developed into stories of Cinderella, Little Red Riding Hood, Jack and the Beanstalk and Rapunzel. However, the main storyline follows a cursed baker and his wife who are trying to bear a child. With the strong, confident voice of senior Lexie Ellis playing the witch, the audience was led into the primary plot of the story and onto the next scene.

In a much darker scene, creative props, such as Grannie’s Bed used during the Wolf’s death, gave the play a more professional ambiance as the costumes and props coordinated perfectly with the strong vocals and acting abilities.

The range of the actors in this show was extremely impressive, seeing as Stephen Sondheim, original “Into the Woods” music writer, “avoids filler in his songs and concentrates on direct impact with verbal interplay,” according to his biography. Senior Ethan Davis played a wonderful Jack, managing to maintain a child-like innocence and curiosity while belting out “Giants in the Sky.” With only a few lines, junior Taylor Bumann features her voice with high melodies throughout the play. Although I am only mentioning a few of the actors, everyone casted carries a strong voice and should be very proud of the vocals they presented.

Having a little knowledge about the play already, I was able to follow along with ease. Without previously being introduced to “Into the Woods,” the play may have been harder to follow.  The introduction of the mystery man’s identity was very brief, and for one who did not already know his place, it was easy to ignore and leave the play with a few questions on the matter.

However, actors managed to carry the underlying emotions between the stories. In the duets of “It Takes Two” and “Agony,” the audience gets a look at bonds that are not prominent through the main storyline. “It Takes Two,” performed by junior Shelby Loftis and senior Jack Clay, demonstrates the chemistry and history between the baker and his wife. “Agony” reveals a more competitive past of the two princes, junior Carson Clay and senior Jah’Arie McGill.

One of the more surprising aspects of the show was the notorious “dancing cow” that was featured along the sidelines of the stage occasionally. Milky White, played by sixth grader Harper Keith, provided comedic relief on serious scenes.

While I have not watched many musical theatre performances, “Into the Woods” by the Bryant Theatre department has influenced me to seek out more.