The Man Who Wants to Replace Tom Cotton

Libertarian Ricky Harrington Jr. Makes His Case for the Senate 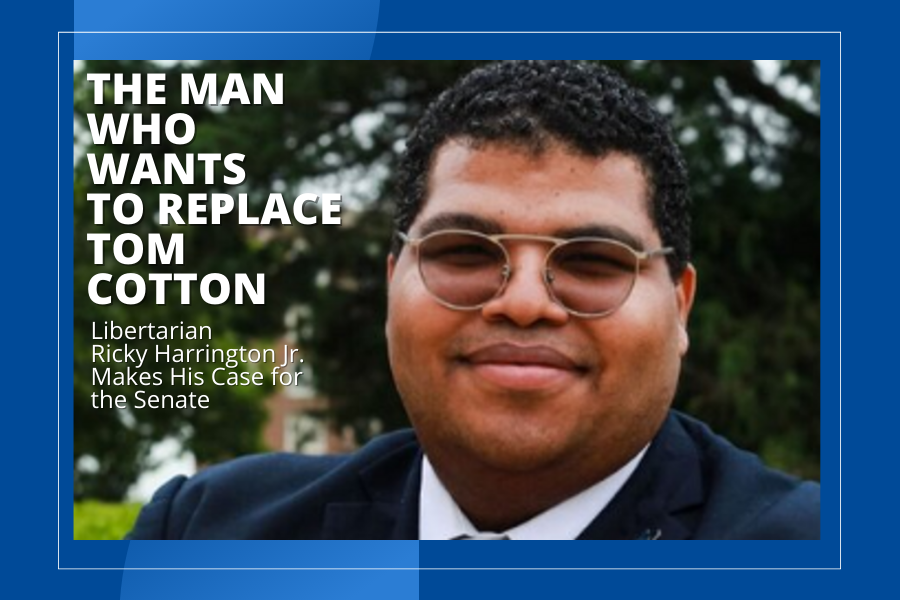 A Libertarian, reformist, missionary, pastor, prison chaplain and correctional officer is the only person challenging Senator Tom Cotton (R) for his seat in the 2020 U.S. Senate election.

Ricky Harrington Jr. is atypical among politicians running for such an esteemed office. He has no experience in public office, nor does he desire in any fashion to play politics. He instead hopes to resolve the increasing partisan divide in the Senate with his experience in transcending personal differences.

“I’ve spent most of my life in difficult environments,” Harrington said in a resonant, deliberate Southern drawl. “In a cross-cultural environment, we have to communicate in a whole new way, in a way that the person can understand. When I worked in a psychiatric hospital, my job was to deal with violent situations, and 90% of the time, those situations were averted because we talked to one another, we understood what was going on and we redirected the person who was acting out.”

Hoping to use those conflict resolution skills in the Senate, Harrington affirmed his commitment to reaching a compromise on every issue, using even incremental change to help Americans.

“We wouldn’t have a United States of America if the founding fathers couldn’t compromise with each other, and they had some very serious issues to deal with when they were forming a nation,” Harrington said. “So for me, I’d work with all other 99 Senators for the American people. It’s not my way or the highway; we have to find a middle ground. What I hope we can all do is realize that in no relationship, if it’s your way or the highway, will it last very long.”

While eager to compromise his policies to bring both parties together, he is much more hesitant to discard his guiding principles and facts.

“There’s a difference between working together on the issues and abandoning your principles,” Harrington said. “A principle I have is that there is an over-incarceration issue in America. It’s something I wouldn’t budge on, because it’s the right thing to do. We’re trying to work on our police reform right now. America is one of the ‘freest nations in the world,’ as we say, but we have extrajudicial killings going on in this nation, where the Constitution guarantees the right to a fair trial. And if we have innocent people being shot and killed in this country, we have a lot of work to do.”

Harrington, who, if elected, would be the first Black Arkansas Senator, is passionate about fixing the prison and police systems in America, calling for substantial criminal justice reform and relying on his own experiences in criminal justice and recent national momentum to bring about that change.

“Criminal justice and healthcare have, since announcing my candidacy, been the top two issues of my campaign,” Harrington said. “And now in this country, criminal justice and healthcare are the two prominent issues, with the protests involving police brutality and COVID-19. I hope people will take a look at the big picture. I know that we can’t care about everything, because we’re human and have a certain mental and emotional capacity, but I think we can work together on these issues rather than being adversarial towards each other.”

That messaging centered on unity and compassion may be striking a chord with Republicans who are dissatisfied with Tom Cotton. Young Republicans president Kamryn Ray appreciates Harrington’s attempts to bring Arkansans together through common beliefs.

“From what I’ve read about him, I like him,” Ray said. “I like some of his ideas; I like that he’s wanting to reform the criminal justice system. It can’t be left the way it is. It needs to be improved, but not defunded.”

Ray, though a staunch conservative, is attracted to Harrington’s more moderate plans, contrasting his policies with those of Sen. Cotton.

Ray prefers Harrington not just on healthcare and criminal justice, but also foreign wars, another issue that the Harrington campaign focuses on.

“I’ve never been overly supportive of Tom Cotton; he’s always been just okay,” Ray said. “I don’t see any major problems with him, but some of his philosophies on war, he likes to go fight and not talk first, which I don’t like. There’s always room to talk first. I don’t like his idea on that. I’ve also read on Ricky, and I like his philosophy of ‘Peace First.’ I won’t be old enough to vote, but if I were to vote, from what I’ve read, I would support Ricky Harrington over Tom Cotton.”

The road ahead for Harrington’s campaign may not be an easy one, though. In Sen. Cotton’s previous election, Libertarian candidate Nathan LaFrance only received 2 percent of the vote, just over 17,000 votes total, and few Libertarian candidates for statewide office in Arkansas have ever received more than 3 percent, the number required by the state to be automatically put on the ballot.

Harrington’s efforts will be bolstered by the fact that there is no Democratic opponent, but even in his own internal polling, he trails by 11 percent. Harrington, though, stays undaunted and focused on his election strategy.

“My strategy is a part of my bigger goal, which is bringing people together across the political spectrum,” Harrington said. “Right now in my campaign, we have Democrats, Republicans, Independents and Libertarians working together. What we’re trying to do is build a coalition of people who want to work together, who are tired of being ideological casualties in the hyper-partisanship that is prevalent in our country now. We’ve been getting out to people in rural communities and counties, [to] speak to them face to face and let them know that someone is running, let them know what I stand for, and [that] what I hope to accomplish is to become the Senator for the State of Arkansas.”

*Edited to clarify percentage of Libertarian candidates who have exceeded 3% of the vote.