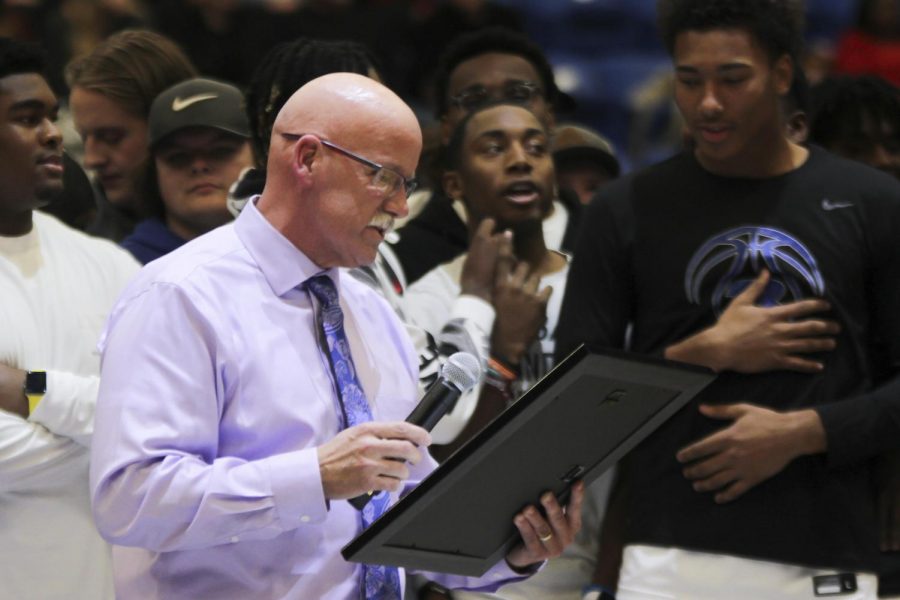 Mayor Allen Scott, former science teacher at Bryant High School, returned home to present a proclamation to the Hornet football state champions Jan. 7. The players gathered around him in the middle of the gym as he read the citation from the city of Bryant.

Scott gave the proclamation shortly after the Lady Hornets basketball team defeated the Benton Lady Panthers 54-23. The arena was crowded with people who came to hear the mayor speak and see the Hornet basketball teams play Benton in the finished facility.

The football team defeated North Little Rock Dec. 6 to win the 7A state football championship for the second year in a row, and according to the proclamation, was ranked among the top 50 high school football teams in the country by MaxPreps.

Several honors were mentioned in the proclamation. Football Coach Buck James was awarded Arkansas All-State Coach of the year for his 43-8 record after his four seasons with the Hornets. Senior Jake Meaders and junior Hayden Schrader, both wide receivers, were named first-time All State. Senior defensive lineman Austin Bailey, senior linebacker Daylon Land and junior quarterback Austin Ledbetter were named second-time All State.

The proclamation also said that “Bryant Athletic Director Mike Lee and his staff provided outstanding leadership in the operation of the athletic department to keep up the success of the team.”

Scott declared Feb. 12, 2020 as “Bryant Hornet Day” in the city of Bryant to acknowledge the accomplishments of the team and award them for their hard work.