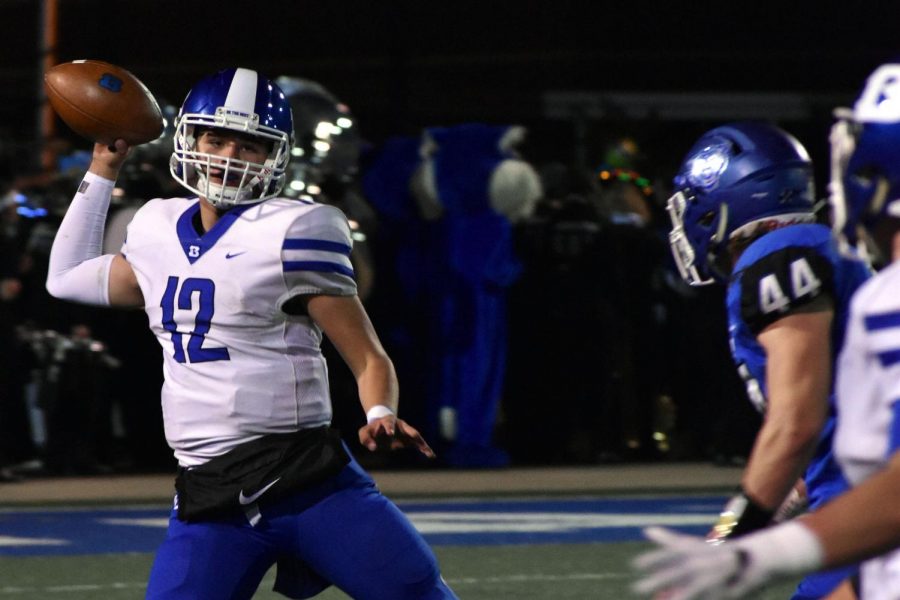 Since coming in at halftime of the 2018 state championship game against North Little Rock as a sophomore and leading the Hornets to a state title, junior quarterback Austin Ledbetter is having the season any 7A QB would dream for.

The Hornets have pulled starters after halftime in eight out of ten games this season. So, essentially, Ledbetter has only played half a season. Even with this limited playing time, Ledbetter has put up stats that no one in Bryant High School history has ever seen, with a total of 2,775 passing yards along with 36 touchdowns. He also broke a school record for touchdowns in a game with six against Central.

“This is my first year being a throwing quarterback,” Ledbetter said. “Since ninth grade, I was considered a running quarterback.”

With 728 receiving yards accompanied by seven touchdowns, junior tight end Hayden Schrader is having a successful season as well. In every game, Ledbetter and Schrader connect for at least 70 yards or more and put on a show. Schrader attributes Ledbetter’s success to the work he puts in during practices and outside the game.

“He knows the game inside and out,” Schrader said. “He watches A LOT of film.”

What makes Ledbetter so successful on the field? Is it talent? Skill? Coaching? Teammates? Preparation? There is not just a one word answer, and it just not as simple as throwing a ball. Playing quarterback takes knowing the defense before they move, memorizing the playbook to make sure he can perfect the plays, and then, of course,putting the ball in the right place at the right time. Ledbetter has done all these things extremely well, consistently.

“I’m where I am today because of my coaches and practice,” Ledbetter said. “I’m practicing six to seven hours a day, along with [watching] three to four hours of film.”

While only a junior, Ledbetter has thought about his future. So far, no colleges have given Ledbetter official offers for football. He has committed to play baseball at the University of Arkansas at Fayetteville, so Ledbetter’s future seems to be away from football.

“I have talked to coaches about pulling a Kyler Murray [playing football and baseball at the same time in college],” Ledbetter said. “I really want to.”

The Hornet defense has benefited from Ledbetter’s great season. Defensive lineman Austin Bailey thinks the momentum created by the offense creates momentum for the defense to seal the game for the Hornets.

“[When] they go out there and score big on the first play, momentum is already high,” Bailey said. “It makes the other team look at each other wondering what to do.”

A common saying in football is “defense wins championships,” but with this explosive new offense, does this standard change? With Ledbetter, this Hornet team has hit top rankings, recruitment and wins.

“He just has amazing vision and puts the ball right where it needs to be,” Schrader said. “He’s just an amazing quarterback overall.”