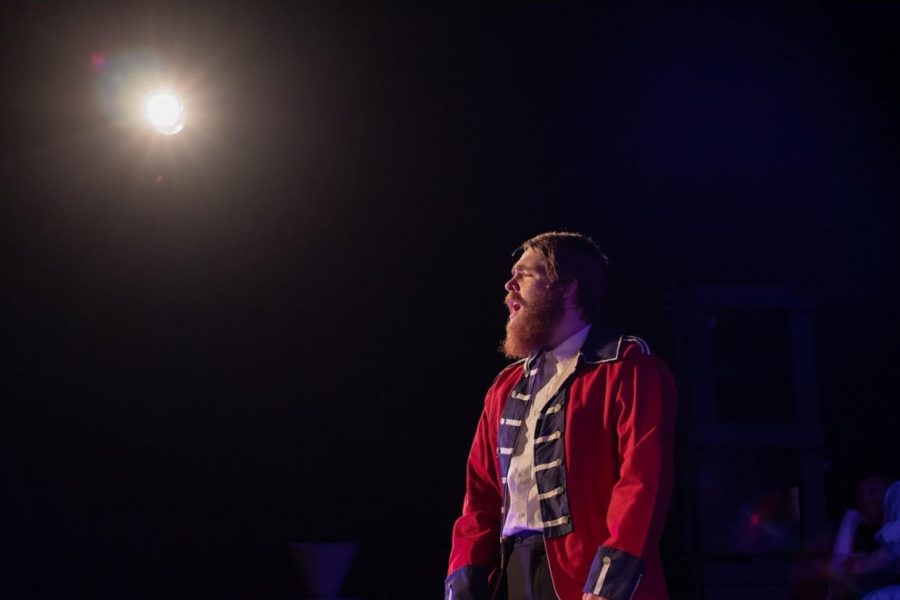 Social injustice, shadowy pasts and unconditional love. “Les Miserables,” a musical epic adapted from the novel of the same title written by Victor Hugo, tells the story of a Frenchman and reformed prisoner, Jean Valjean, searching for vindication and redemption after serving nineteen years in jail for stealing a loaf of bread for his starving niece.

The Young Players, a youth program organized by the Royal Theater in downtown Benton, will perform a school edition of “Les Miserables” Sept. 22, 28, 29, Oct. 5 and 6. Many of the cast members are Bryant students, such as senior Nathan Brown, who occupies the role of Jean Valjean.

“[Jean Valjean’s] whole character is being a moral man while running from the law for pretty much his entire life,” Brown said. “This is my first community theater show, so being able to get into character has been a little tricky, but at the same time, it’s just that willingness.”

Brown relates the personal connection with his character to the difficulty of the performance, finding that the more he understands his role, the easier it becomes.

“If I were to play an antagonist of some sort, I feel like it’d be kind of difficult to get into character, but knowing that even when Valjean did wrong in the play, his intentions were always pretty good, that’s just what I have to keep in mind when I’m trying to get into character,” Brown said.

“[Eponine is] very lonely,” Ellis said. “She doesn’t have lots of friends. While I’ve kind of gotten out of that, for a while I didn’t feel like that was a thing that I had, so I can relate to that and being lonely and feeling like you always gotta stick with this group of people because they’ve taken care of you your whole life.”

Past the endeavor of performing a part, Ellis finds balancing rehearsals and AP classes one of the biggest struggles of committing to a production but finds ways to manage.

“You’re really kind of sacrificing your academics or your sleep, but it’s all worth it in the end,” Ellis said. As long as you’re actively checking grades, it’s easy to keep up because you have that motivation.”

While students involved in extracurriculars often encounter this issue, sophomore Carson Clay, who plays a lead character, Javert, finds that even performers who do not have a lead carry a lot of responsibilities.

“If I’m being honest, being a lead is easy,” Clay said. “Now, being an ensemble member, you have to learn every single song. If one ensemble member messes up, people notice it. It’s a common saying in theater, ‘Fake it ‘till you make it.’ Just smile and pretend like you know what you’re doing.”

The attentiveness to production and technicalities plays a key role in the success of a production according to Clay, who’s been performing at the Royal Theater since he was five years old.

“Theater really has to be a well oiled machine if you want it to succeed, so you can’t slack off,” Clay said. You can’t talk while someone’s giving instructions. Even one piece of information, if you miss it, it could screw up the entire thing and it could take literal weeks to do a dance number that should’ve only taken three days.”

Brown finds that audiences often lack appreciation for these technicalities and schematics, which require a lot of effort.

“A lot of times what people don’t think about [with] plays is the technical aspect.” Brown said. “People think about what happens on stage, but what happens off stage and everything that moves around is just crazy. People just don’t appreciate that enough.”

Beyond the logistics and acting aspect comes the music. Choir director Tanner Oglesby acts as the music director for “Les Miserables,” teaching vocal technique and assisting with clarity.

“The biggest struggle I’ve encountered in this production so far is that the music requires a lot of stamina,” Oglesby said. “We have students playing many roles in the show, and I remembered it was one of my biggest challenges as a singer in the show, and it proves to still be a timeless challenge for our kids now.”

This is Oglesby’s second visit to the show, his first time around being for the same youth program, the Young Players, when he was a junior in high school.

“My first time ever to sing was on stage and in ‘Les Mis,’” Oglesby said. “It was my first inspiration and my guide to come into choral music, so coming back to it is different, because I’m trying not to live on the success of the past production; I’m trying to make this new production something new and fresh.”

Since many Bryant choir students are involved in this production, Oglesby’s connection with these students has functioned as a foundation for the work ethic and environment of the show.

“We already have this understanding of how we’re supposed to do things and how I work as a teacher and how I expect them to work as students,” Oglesby said. “There’s also a little bit of trust that we’ve developed in class, so I’m able to continue that trust in the production, and so it really works well for them to learn the music and be at their best.”

A thriving theater and choir environment has been established with so many Bryant students involved with community theater shows, offering a safe and comfortable place for many people.

“I think all my friends besides a couple are theater people,” Ellis said. “Theater has really helped me grow as a person, and it’s made me more friends than I could count.”

Extracurriculars offer personal growth, connections, and the chance to practice their passion, but the fine arts gives participants an adrenaline rush rarely experienced in other activities.

Only a week and a half after tickets were released, the first two shows have sold out, and “Les Miserables” has visitors from all across Arkansas, some even coming from outside of the state.

“Getting to know this cast has been a great experience,” Brown said. “There’s a lot of talent and experience within the actors and directors, and the sense of security that comes from working with experienced people is a huge plus.”